TORONTO – Drivers on one Toronto highway are seeing a counterintuitive message this week: “Text and Drive.”

Two billboards on the Gardiner Expressway purport to be an encouragement from a funeral home, but it’s really an advertising agency behind the provocative public-service announcement geared at curbing distracted driving. 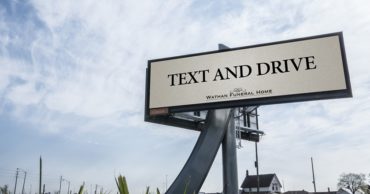 Drivers on one Toronto highway are seeing a counterintuitive message this week: “Text and Drive.”

At first glance, Wathan Funeral Home appears to be prompting drivers to text as a way to boost the number of car accidents and therefore its business, said Mylene Savoie, managing director of John St. advertising firm, which is behind the PSA.

“(It) is absolutely provocative and absolutely shocking when you first see it,” she said Thursday.

When drivers search for the funeral home online, incensed at its gall, she said, they discover it’s fake. The home’s website is filled with information about the impact of texting and driving. 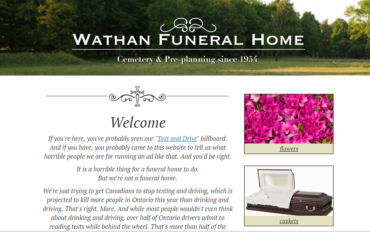 While all the provinces as well as Yukon and the Northwest Territories ban people from using handheld devices while driving, distracted driving may be a bigger problem than drunk driving in the country, according to the Insurance Bureau of Canada.

Distracted driving doesn’t just include texting. It can also refer to people who fiddle with the settings on a GPS or focus on a handheld device for many other reasons.

People who take their eyes off the road for more than two seconds double their risk of getting in a collision, according to the Ontario Ministry of Transportation.

In the United States, about eight people died and more than 1,100 others were injured on average daily in crashes that reportedly involved a distracted driver in 2013, according to the National Highway Traffic Safety Administration. 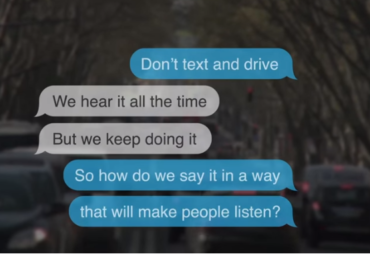 In Ontario, 69 people died last year in accidents where driver distraction played a role, the Ontario Provincial Police said, outnumbering all other categories for the third year in a row.

John St. said it decided to tackle this issue on its own. The ad agency teamed up with Cieslok Media, which provided the billboard space.

The agency opted for the provocative angle to grab public attention and not get lost among the many ads people see every day, said Savoie.

So far, the reaction to the ad has been positive, she said.

It’s not the first time a PSA on the perils of texting while driving has been tackled creatively.

The Alberta government has run a “crotches kill” anti-texting-and-driving campaign for multiple years.

The text-and-drive billboards in Toronto went up earlier this week and will remain on display until Sunday.