Your client texts a driver who crashes. Is your client liable?

Look for Canadian case law to impose secondary liability on texters who distract drivers with their email messages, akin to social host liability, a senior claims executive at Travelers predicts. 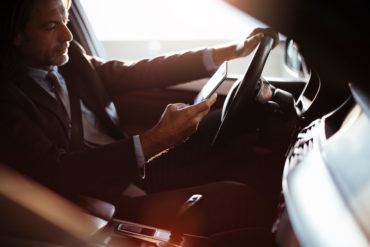 “If I text someone while driving, and they get into an accident, I could be responsible for part of that,” said Jordan Solway, group general counsel and vice president of claims at Travelers. “Beyond that…if you are driving a vehicle, your employer has vicarious liability for damage caused [by you as a driver] to a third party [in an accident].”

Solway remarked on the secondary liability of texters while speaking at EverySecondMatters, a panel discussion held in Toronto Monday. The event was hosted by Travelers and its public policy division, the Travelers Institute.

During the program, Travelers revealed the results of an online survey by The Harris Poll it commissioned, based on the response of more than 900 Canadian drivers. Overall, the survey found that 37 per cent of Canadian drivers use a mobile device to communicate while driving.

Thirty-one per cent of respondents said they felt compelled to use their mobile devices while driving because of family obligations that require constant attention. Another 14% said they always wanted to be available for work.

Solway pointed out that case law already exists in Canada that imposes a secondary liability on employers who increase the risk of a crash by sending text messages out to their employees, knowing that they are driving and will respond right away. For this reason, it’s important for employers to create and enforce strong workplace policies around texting employees who are known to be on the road.

But the secondary liability could extend to texters who are not employers, Solway said.

For example, a U.S. case in New Jersey suggests that parents sending texts to children while they are driving could also be found partially at fault for a crash.

The New Jersey case Solway referred to in his presentation is Kubert v. Best, issued in 2013. In that case, The Superior Court of New Jersey, Appellate Division did find that “the sender of a text message can potentially be held liable if an accident is caused by texting, but only if the sender knew or had special reason to know, the recipient will view the text by driving.”

Examples of a “special relationship” that would give the sender a reason to believe that a driver would immediately answer a text include an “employer-employee” or a “parent-child” relationship, the court found.

In Kubert v. Best, a 17-year-old female friend (not a girlfriend, the court noted) texted an 18-year-old driver, Kyle Best, one minute before his pick-up truck crossed the median and hit two bikers. The court found that Best’s 17-year-old friend had texted him 180 times up to 12 hours before the collision, including a text about a minute before the accident (Best had texted his friend twice up to five minutes before the accident).

However, the court found Best’s friend was not responsible for the crash, but only because the cyclists were unable to prove that Best’s friend did not have any “special reason to know” that her text would cause Best to crash into the cyclists.

At the same time, the court found a person has a duty of care not to interfere with the driver’s operations. This is based on “foreseeability of the risk of harm,” which in turn is based on whether the sender would have knowledge of the risk of an injury.

Solway said the “foreseeability” principle is also a key concept in social host liability, in which a host who serves alcohol at a party can be found vicariously liable if he or she allows guests to drive after drinking too much alcohol (thus increasing the risk that the driver will get into an accident).

4 Comments » for Your client texts a driver who crashes. Is your client liable?