Among a myriad of issues facing Canada’s P&C industry, reduced capacity in the property and casualty insurance market is top of mind for one senior executive at Gallagher.

“While rate is a very big concern, capacity reduction, to me, is the most concerning challenge we’re facing today,” said Kevin Neiles, chief marketing officer and Western Canada president at Gallagher. “Most carriers are limiting capacity and particularly…in large risks.”

Neiles made his concerns known during the opening presentation of Gallagher Talks, a one-day virtual thought leadership event hosted Sept. 15 by the Canadian arm of the global brokerage.

Times have changed from just a couple of years ago, when insurance companies took on the full exposure on large risks, Neiles observed. Now they’ve slashed that significantly, while also bumping up rates and making other requests.

“For instance, two or three years ago when [insurers] were anxious to use as much of their capital as they could, they were taking on 100% of the exposure on large risks,” he said during the Canadian Market Projections presentation. “In many cases, now, when we’re looking at renewal terms, they’re looking at reducing from that 100% capacity down to 30% or 40% capacity. And [they are] also wanting higher rates for that reduced capacity, wanting higher deductibles, and self-insured retentions, and all sorts of other changes to terms that are tough on clients but probably necessary to help bring the business to the level of profitability that’s necessary to make it viable.” 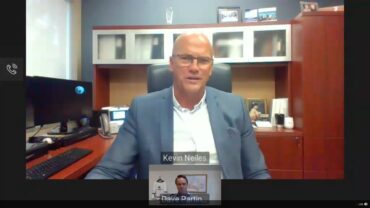 This state of affairs is pushing brokers to explore different alternatives.

Because of the current state of the market, excess cover can’t be obtained in spots where excess coverage is needed beyond what would be a traditional quota share, Neiles said. “So we’re finding that where we would have expected excess layers to be a lot more affordable, in some cases, the rates they’re charging on the excess is just as high as that on the primary, where the majority of the losses are going to happen.”

So brokers have to put their thinking caps on and come up with different ways of finding coverage for their clients, he added.

“We needed to create a lot of very unique and creative capacity structures. Simple structures just on a large risk don’t seem to be working anymore to get the insurance covered fully.”