Insurance companies are used to collecting data, but they need to do a better job of using data around race and gender to build diversity and inclusion in their senior ranks, speakers said Tuesday at KPMG’s 2020 Insurance Conference.

Insurers may collect data on gender, but the intersectionality around race and gender data (for women of colour) is lacking in the industry. To improve diversity, equity and inclusion (DEI), there needs to be a deliberate effort to embed it into the DNA of the organization, said Michelle Taylor-Jones, vice president of global DEI at Manulife Financial.

“DEI has to be throughout the entire lifeline of the business, from services to products to businesses … to every single part of the organization, really, to build a strategy that’s scalable and able to last for a very long time,” Taylor-Jones said. “As organizations, we tend to look at the next shiny object and what’s popular to do.

“This is a different time. It’s time to slow down and build a strategy that’s going to be lasting and really influence all parts of the business.”

Mary Lou Maher is the Canadian managing partner, quality & risk management and global head of inclusion & diversity with KPMG in Canada. She noted that most of the data KPMG has collected to date has been on gender. Black, Indigenous and People of Colour (BIPOC) “is an area where we have to dig a bit deeper and hold the mirror up close to ourselves, whether it’s at the board or executive level. We’re just not doing well there at all.” 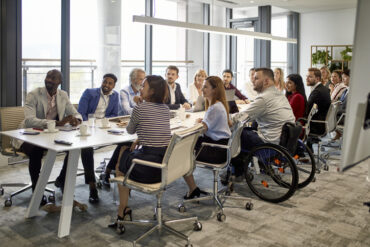 Maher was part of a panel speaking at the Harnessing the Power of Diversity session, held virtually. She was responding to a question from moderator Greg Meckbach, Canadian Underwriter’s associate editor, about where the industry — in Canada, the United States and globally — is at now in representing the general population at the board and senior management level.

From a gender perspective in the insurance industry, Canada is “not doing too poorly,” with the average board compromised of about 35% women. Statistics Canada reported in 2019 that 19.4% of board directors in all industries are women. “This industry, in particular, has moved the dial on a gender basis,” Maher said. “Hopefully it can do the same [for] BIPOC.”

Taylor-Jones, who is based out of Manulife’s Boston location, said the carrier has collected data around gender and the BIPOC community in Canada and is looking at getting a “baseline number,” so it can put in the same targets it has in the U.S.

“First and foremost, nothing measured, nothing done,” Taylor-Jones said. She said it’s not so much about setting quotas or targets, but giving a gauge “in which we can measure progress over time.

“If we talking about changing the face of the organization to really mirror the marketplace as well as our customer base, we really need to have a goal,” Taylor-Jones said. “Organizations are very goal-based in terms of sales projections and products, and so why should DEI and the DEI strategy be different?

Rowena Chan, president of Sun Life Financial Distributors (Canada) Inc. and senior vice president of distribution, said there needs to be a deliberate effort, particularly within the Black and Indigenous communities. “We need to plot that journey very early, even before campus recruiting,” she said. “It’s a long-term commitment to bring full diversity into the mix.”

This intersectionality between gender and race is something “we’re focusing on today that we didn’t five years ago,” Maher said.

“If you’re going to start looking at your data today, the best time to plant a tree was 20 years ago,” she said. “The second-best time is today. We need to make sure it’s an equitable journey for everybody within our firm to get to where they want to get to.”