The demographic suffering most during remote work

Very young workers at your brokerage or insurance company are the “overlooked demographic” that may be suffering the most as we pass the one-year anniversary of working from home during the pandemic, according to a recent survey from Microsoft Corp.

Sixty percent of Gen Z workers — roughly those between the ages of 18 and 25 — reported they are “merely surviving or flat-out struggling right now,” said the survey, The Next Great Disruption Is Hybrid Work—Are We Ready?

The first annual Work Trend Index survey polled more than 31,000 full-time or self-employed workers across 31 markets, including Canada, and a mix of work environments and industries.

“Gen Z is at risk and will need to be re-energized,” Microsoft said in a press release Monday, when it announced the survey findings. The sagging fortunes of young employees is one seven hybrid work trends identified in the survey as requiring the attention of business leaders in this “new era of work.”

“Networking as someone early in their career has gotten so much more daunting since the move to fully remote work, especially since switching to a totally different team during the pandemic,” reports Hannah McConnaughey, a Generation Z product marketing manager at Microsoft. “Without hallway conversations, chance encounters, and small talk over coffee, it’s hard to feel connected even to my immediate team, much less build meaningful connections across the company.” 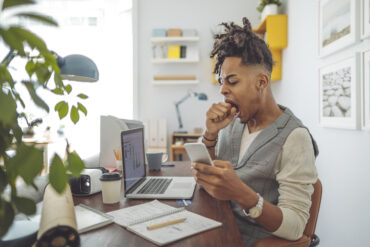 Survey respondents reported they were more likely (by a factor of 8%) to struggle balancing work with life and to feel exhausted after a typical day of work compared to older generations, the survey found. Gen Z also reported difficulties feeling engaged or excited at work, getting a word in during meetings, and bringing new ideas to the table.

Among other trends identified in the survey, “high productivity is masking an exhausted workforce,” Microsoft reported.

One in five global survey respondents said their employer didn’t care about their work-life balance. Fifty-four per cent said they were overworked, while 39% said they feel exhausted.

The intensity of workers’ days has increased substantially, thanks to an increase in the number of digital meetings and chats related to work. When comparing collaboration trends in Microsoft 365 between February 2020 and February 2021, the survey found:

“This barrage of communication is unstructured and most unplanned, with 63% of calls and meetings unscheduled or conducted ad hoc,” the survey said. “And workers are feeling the pressure to keep up.

“Despite meeting and chat overload, 50% of people respond to Teams chats within five minutes or less, a response time that has not changed year-over-year. This proves the intensity of our workday, and that what is expected of employees during this time, has increased significantly.”