The price you pay for a lack of diversity

If your brokerage lacks diversity, you may not only be missing out on growth opportunities, but you also are setting yourself up for bad hires, bad decision-making, and reputational harm, a keynote speaker recently told Ontario brokers.

Organizations lacking diversity have a limited capacity to identify potential instances of reputational harm, because the team does not have the perspective to see issues that could result in serious consequences, according to Anthony McLean, who speaks on diversity, inclusion and mental health. McLean made his remarks at the virtual IBAO Convention last month.

McLean gave the example of clothing retailer H&M. The company marketed a shirt that used the slogan, “Cutest Monkey in the Jungle” with a Black child as the model in 2018. The company’s apparent lack of awareness around the use of the term “monkey” and its connection to Black racism was slammed. Celebrity endorsers, including Canadian artist The Weeknd, distanced themselves from the company, which eventually apologized for not recognizing the racial connotation.

Mistakes like that happen when there’s a lack of diversity on your team, McLean explained. If a Black person had been on the team or had been given the opportunity to review the ad, it’s likely a red flag would have gone off.

McLean went on to equate a diverse team to satellites providing GPS services. Twenty-four satellites are orbiting the Earth; four are within direct line of sight of anyone at any given time. This provides pinpoint accuracy because they view your position from different perspectives. If the world’s satellites were instead bunched together in one area, they can’t see very much.

GPS “only works when they have a different vantage point; when they’re seeing you from a different perspective,” McLean said. 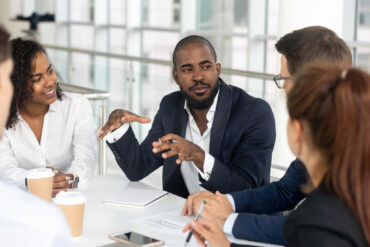 Diverse teams are strengthened when brokerage leaders recognize their unconscious bias — social stereotypes about groups of people that are formed outside of conscious awareness.

McLean mentioned two people – one an astrophysicist and the other a basketball player. One is of Asian descent, the other is Black. Our unconscious bias, he said, would lead us to think the Asian man wearing glasses is the scientist while the Black man is the athlete. But in this case, the Asian person was Jeremey Lin, a 10-year NBA veteran, while the Black person was noted American astrophysicist Neil DeGrasse Tyson.

Everyone has unconscious bias, McLean said, but what if it comes into play at the wrong time?

“What if you’re hiring someone?” he said. “What if you need someone really, really sharp and these two gentlemen come in the room and you’re not aware of unconscious bias? You look at the Black guy, and you think, ‘I don’t know. Maybe?’ And then you look at the Asian guy, and you [see him] with glasses, and you’re like, ‘Something about him, I just have a gut feeling. I think this is the guy.’”

That kind of a mistake could mean missing out on hiring one of the most brilliant minds on the planet. “We all have unconscious bias and it only hurts us when we’re not aware of it,” McLean said.

He also brought up a game kids play called ‘Samesies.’ That’s when they find things they have in common, like favourite colour or sports team, and shout, “Samesies!”

It’s something adults also tend to use when hiring — picking talent based on similar interests or styles. You run the risk of everyone thinking about and seeing everything in the same way. You miss out on is a diversity of opinion and viewpoints, McLean warned.

“When we’re hiring someone, we find out we take the same kinds of vacations and we both appreciate the same kind of music. ‘I like this candidate for the job. Samesies!’ And you can actually hire the wrong person for the job because of Samesies,” he said. “So be careful of Samesies.”