A single large-scale natural disaster can cause the sudden failure of an otherwise solvent insurer, warns a new report from the Property and Casualty Insurance Compensation Corporation (PACICC).

Climate change, which has fuelled increases in the severity and frequency of natural disasters, has become a “new and significant” source of potential insurer failures, PACICC says.

“This was certainly the case with Merced Property and Casualty Company (Merced), a small and historically stable P&C insurance company headquartered in Atwater, California,” PACICC says in the report, Mapping the road to ruin: Lessons learned from four recent insurer failures.

Failure to properly understand exposure aggregation, and the inadequate stress-testing of capital and reinsurance requirements in the context of such aggregations, can lead directly to sudden insurer failure, PACICC warns. Naturally-occurring perils that can lead to catastrophic loss include earthquakes, floods, wildfires, landslides, hurricanes, tornadoes, severe storms and storm surges.

“Many of these perils appear to be accelerating in line with scientists’ warnings regarding the consequences of climate change,” PACICC says. “High-impact, low-probability perils, while not cited as a primary cause of failure in any of the Why Insurers Fail research studies to date, have more recently led to numerous P&C insurers’ failures abroad.” 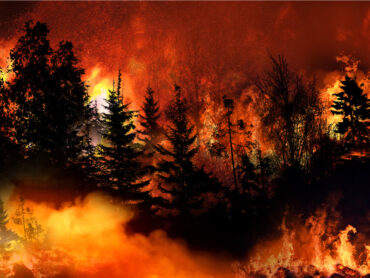 In the case of Merced Property & Casualty Company, one of the most disastrous wildfires in history caused the sudden failure of the 112-year-old insurer in 2018.

The so-called “Camp Fire” in California resulted in US$17 billion in insured losses and destroyed nearly 19,000 buildings, including every building in the town of Paradise.

The fire brings to mind the Lytton, B.C. wildfire, albeit on a much smaller scale. The Lytton wildfire destroyed an estimated 90% of the town last year and caused an estimated $102 million in insured losses.

For Merced, estimated losses in the town of Paradise alone totalled US$64 million. Merced also had an estimated US$87 in liabilities — far in excess of its US$23 million of capital.

The Camp Fire in California began around 6:30 a.m. on Nov. 8, 2018, when a powerline owned by utility firm Pacific Gas & Electric Co. sparked a massive fire around Camp Creek Road in the Pulga area of Butte County, Calif. Facilitated by Diablo winds, dry weather and combustible vegetation, the Camp Fire quickly swallowed up three nearby towns in Butte County — Concow, Magalia and Paradise.

In Merced’s case, the company had particularly concentrated risks. Its business strategy relied heavily on homeowners’ insurance sold in California (the insurer, established in 1906 as Merced Mutual Insurance Co., sold a variety of policies, including home, auto, marine and farm). At the end of 2017, the homeowner line accounted for 60.5% of Merced’s active policies and 81.4% of its direct written premiums.

In addition, Merced’s insured risks were heavily concentrated in areas that were classified as “high severity zones” by the California Department of Forestry and Fire Protection. “Although very risky, this lack of business and geographical diversity was common for many small, regional insurers in California,” PACICC’s report says. While the primary cause of failure for Merced was catastrophic loss from the 2018 Camp Fire, an over-concentration of risk, both geographically in areas highly susceptible to natural disasters and by line of business, contributed to the failure.

Given the last failure of a Canadian P&C insurer occurred two decades ago, it might be tempting to conclude insurer failures are a thing of the past, PACICC says.

“Despite numerous improvements in P&C insurers’ operations, governance and supervision, it is still possible for insurers to fail — and they continue to do so,” the compensation fund notes. “The role of climate change in magnifying the damage caused by naturally-occurring perils adds a new dynamic to the equation.

“This is now a fourth potential cause of P&C insurer failure. Possible ‘roads to ruin’ exist in all insurance jurisdictions around the world — including Canada.”

Feature image: In this Thursday, Oct. 17, 2019, photo, Joe Budds, a construction foreman for Otto Construction, inspects one of the rooms at the Feather River Hospital that was damaged during last year’s Camp Fire in Paradise, Calif. Once the town’s largest employer, Feather River Hospital is still closed but plans are in the works to reopen the emergency room. (AP Photo/Rich Pedroncelli)