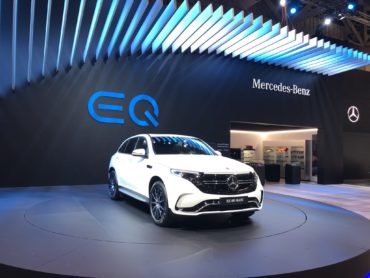 The Mercedes Benz EQC, an all-electric luxury vehicle on display at the 2019 Canadian International AutoShow. Vehicles like this could be at greater risk for collisions, according to preliminary research.

Several car makers have announced ambitious plans to go electric in the next decade or two, but as more electric vehicles (EVs) hit the streets, there could be an increased insurance risk, according to one insurer.

With the growing popularity of EVs – nearly 3 million are expected to be sold this year globally, while 30% of all vehicles are anticipated to be electric by 2040, according to expert estimates – insurance professionals at AXA in Switzerland wanted to know what this meant for insurers, emergency responders and pedestrians.

The answer? The possibility of an increased risk of collisions, specifically when it comes to electric luxury SUVs compared to traditional internal combustion engine (ICE) vehicles, said Bettina Zahnd, accident research and prevention manager with AXA in Zurich.

“It’s a new challenge on the roads,” she told Canadian Underwriter, whether it’s the fire department arriving at the scene of a crash or pedestrians knowing what they should and shouldn’t do around an EV involved in a crash.

When AXA ran its tests, electric cars versus ICE cars didn’t seem to fare too differently. But when you change classes, some differences were seen. In smaller and micro cars, the risk of an EV crash was slightly down. But when the cars get bigger, that’s where the risk went up.

“We see the about 40% more accidents in third-party liability with electric cars in the class of luxury and SUV,” Zahnd said.

There are a few reasons why, she explained. One is sound: you don’t hear EVs coming as easily. But the other, and bigger, issue was in the vehicle’s acceleration and power.

When a driver pushes down on the gas pedal with an ICE, the response is slightly delayed. In EV, it’s immediate and consistent, Zahnd said. “Acceleration is there right at the moment you push on the pedal. That’s the thing a lot of people do underestimate.”

And that power can be overwhelming to some people. The way Zahnd puts it: When you get a driver’s licence, you passed the test based on the vehicle you drove. That doesn’t mean you have the skills to drive any car available. “Electric cars do behave differently than normal cars and people need to know the differences and be aware of these differences. Especially in some extreme situations, you have to react very fast.”

She cautioned, however, that this was a preliminary study and more research is needed before making any final conclusions. The company conducted a 7,000-year test, the equivalent of 1,000 cars over seven years, Zahnd said. “That’s not statistically significant but it’s a first step for us. We need to have a look at it and [raise the alarm] and see how this will evolve.”

The study was done in Europe where desires to move to an electric society are a bit higher than in North America. Still, the number of EVs on roads there are small compared to here. The likelihood, Zahnd said, is that data will be collected and analyzed faster in North America.

“We want to be very careful in the next few years to see what we get; some more hints that this is really the case,” she said.

With the expected EV boom coming – Zahnd pointed to political will to reduce the carbon footprint by pushing electric vehicles – so this data is of importance and interest to insurers. “We need to be prepared for these new challenges,” she said.