Chile, Argentina and the American West are in the midst of a decade-long, megadrought – the driest conditions those regions have seen in a century. And many areas in Western Canada and the United States are experiencing extreme drought – a once in 20-year event.

Drought makes agriculture less productive, reduces crop yields and increases heat-related deaths. It adds to conflict and migration, as marginalized people are dispossessed of their land. In short, it leaves people more vulnerable.

Drought is part of natural climate variability, but it is also one of the many outcomes of climate change that is increasing in frequency and intensity. Droughts that used to occur in dry regions once every 10 years are now projected to occur more than four times a decade, if the Earth’s average temperature warms by 4 C.

Unless countries dramatically reduce their emissions from burning coal, oil and natural gas, we are bound to overshoot the goal of limiting global warming to 1.5 C. Dryland areas could expand by a quarter and encompass half of the Earth’s land area, including parts of the Prairies.

Governments need to acknowledge that changes are already happening to dryland areas and that others can no longer be avoided, even with reduced emissions. We need to see better strategies to respond to wildfire, water scarcity and conflict, land degradation and desertification, if we are to reduce the loss of livelihoods and life from drought.

Drylands are warming twice as fast as humid areas. Scientists predict that in the next 50 years, between one billion and three billion people will be living in temperatures exceeding the climate range that has served humanity for more than 6,000 years, or migrating elsewhere.

Livelihoods and life will change fundamentally in these areas. Animal husbandry – such as livestock production – will no longer be possible as increasing temperatures lead to the widespread death of animals. And city infrastructure wasn’t built to handle intense flood events, which are causing damage and increasing in many dryland areas.

Current climate adaptation efforts to near-term drought and flood events tend to be reactive, incremental and small. For example, Yorkton, Sask., responded to three consecutive flood events with some infrastructure change, but enduring social learning has been lost as time passes. 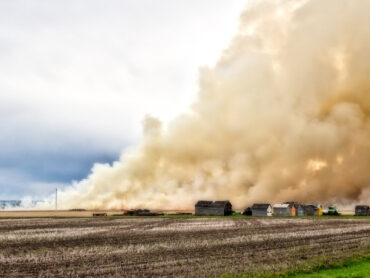 Governments must start implementing policies that aim to reduce the future impacts of drought and build farmer resilience. They might offer solutions to wind erosion and dust management or launch campaigns to reduce water consumption and promote the restoration or reclamation of landscapes. They could embrace landscape heterogeneity strategies – varieties of crops and patches of non-cultivated land – that allow bees and pollinators to thrive. After wildfires, policies and funding could accelerate restoration by planting trees and vegetation for wind breaks, as well as encourage farmers to plant drought-tolerant food crops.

Assessing the risk of climate events such as drought, flood or fire and their impacts before they occur allows for the assessment of the appropriate division of public and private responsibilities in preventing, planning for, responding to these events when they do occur.

While increasing incremental adaptation is important, large systemic change or transformational adaptation may be necessary to address worsening climate risks. These adaptations might include developing and implementing water storage technologies, changes to grazing and farming practices to preserve soil and behavioural changes to reduce water usage.

There may also be residual risks that adaptation can’t address, as well as maladaptation – actions that unintentionally increase the risk of adverse outcomes due to climate change. For instance, groundwater is a source of irrigation in many parts of the world and its depletion may have passed a tipping point where it cannot be recharged by precipitation.

In water-scarce regions, farmers may use low-quality water resources (called marginal quality waters), such as wastewater or drainage water, that may be high in salts, pathogens and heavy metals, to irrigate their crops. This can lead to salt accumulating in the soil and can make the land unusable for agriculture, which can then have consequences for food security.

In India, for example, hectares of land are projected to become unusable by 2050, at a cost of US$3 billion. The global economic losses of salt-induced land degradation are estimated at US$27.3 billion per year. In California, lack of irrigation water could cause food prices to rise globally.

While the world’s governments consider ways to reduce emissions to limit global warming, adaptation and resilience must remain high on their list of priorities. The world is on course to overshoot its climate targets and, as the window of opportunity closes, these polices have become increasingly necessary.

This article is republished from The Conversation under a Creative Commons license. Disclosure information is available on the original site. Read the original article: https://theconversation.com/the-window-of-opportunity-to-address-increasing-drought-and-expanding-drylands-is-vanishing-176731