Ford F-series Super Duty trucks dominated the Insurance Bureau of Canada (IBC)’s 2017 list of Top 10 stolen vehicles because they are perfect for both individuals committing ‘opportunistic’ crimes such as joyriding and for organized crime rings looking to sell parts on the black market. 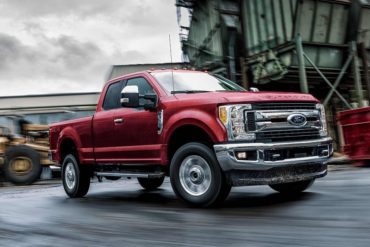 The Number 1 stolen vehicle in Canada made the top of IBC’s list because of a statistical anomaly, Service told Canadian Underwriter Tuesday.

Four hundred and eighty-three Lexus GX460 4-Door AWD SUVs were sold in Canada in 2015, and 27 of them were stolen. The high percentage placed the Lexus at the top of the list, although eight different Ford super duty trucks appeared on the IBC’s Top 10 list.

According to Statistics Canada, there were declines in motor vehicle theft in most major cities across the country. Between 2015 and 2016, motor vehicle theft across Canada was down slightly to just over 78,000 cases, with the most significant declines being in Gatineau, Trois-Rivières, and Sudbury. Prince Edward Island reported the lowest rate of theft at 60 cases per 100,000 people.

At 536 cases per 100,000 people, Alberta once again reported the highest rate of auto theft in Canada.

Service said the number of unrecovered vehicles in the province, a rate that declined to 15 per cent last year, points to one reason why the vehicle theft rate is so high in the province—the presence of organized crime. “Vehicles get stolen and then they get ‘parted out,’ autobody shops will get parts and pieces and will use those to repair vehicles, or the vehicles will get re-VINned and sold to unsuspecting consumers, or they will get stuck in a [container] and get sent all over the world.”

How can insurers help to bring the numbers of stolen cars down when entrenched organized crime rings may be involved? “I think the only really effective way to do it is to act in strong cooperation with law enforcement to address how these things are getting stolen,” Service said.

One of the keys in Alberta has been to change the mindset of local police over the course of three decades, Service said. Decades ago, police demonstrated the belief that opportunistic car theft was more or less a higher-order version of shoplifting a piece of candy in a corner store—what cops might refer to as “chocolate bars on wheels.” The idea was that police would not endanger public safety by getting into a high-speed chase over what was essentially a “chocolate bar on wheels.”

Service said the attitudes of local law enforcement changed when they saw how the mobility of the thieves corresponded to elevated levels of secondary and tertiary crime sprees related to the vehicle theft. When it could be demonstrated to police that reducing car thefts also reduced the incidence of related crimes as well, law enforcement’s attitude towards car theft shifted.

“We’ve had great success with the police here,” Service said.

More News
Related
Making ICBC a co-op one option for B.C., competition must be part of any option selected: taxpayers federation
Auto insurance rates dropping in Ontario, but increasing in Alberta: LowestRates.ca
Fate of this province’s auto reform now in the hands of politicians
Ford investing US$1 billion over five years in AI company to develop virtual driver system