Ten years after serious flooding in much of the southern part of Manitoba, there is again a high risk of major spring flooding in the province’s Red River Valley region.

“Early forecasting data shows that we expect to see major flooding along the Red River, with both the Red River Floodway and the Portage Diversion pressed into service,” said Manitoba Infrastructure Minister Ron Schuler in a press release Thursday. The Red River Floodway is an artificial flood control waterway, while the Portage Diversion is a water control structure that attempts to divert some of the flow of water in the Assiniboine River to a diversion channel. 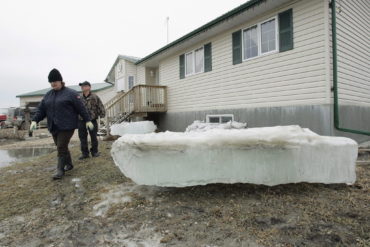 Barb Truman and her brother Joe Wiebe survey the damage done by ice and water to her home in St.Clements, Man. on Monday April 13, 2009. Massive blocks of ice were forced onto the shore at Breezy Point and St Clements, Manitoba early Sunday morning. Residents were evacuated from there homes when Red River flood water and ice threatened their homes. THE CANADIAN PRESS/John Woods

With normal weather conditions, levels of the Red River south of the floodway are expected to be near 2011 levels. However, unfavourable weather conditions, include late season snow, spring rains and a more rapid snowmelt would bring Red River levels comparable to the 2009 levels. These levels saw extended road closures of Manitoba Highway 75 and other roads and evacuations in some areas.

A spring flood report from the provincial government released in August 2009 said there was severe overland flooding in the Red River Valley, southern Interlake and eastern Manitoba due to drainages blocked by ice. In late June of that year, a 75-100 millimetre rainfall over these regions produced extensive overland flooding. Some rural homes were surrounded by water and others, including some in Winnipeg, had basement flooding.

In Canada, overland flood insurance was generally unavailable before 2015. That year, Aviva Canada, The Co-operators and RSA Canada were among the first insurers to offer coverage. The need for overland flood cover became apparent following the 2013 southern Alberta floods that resulted in economic losses of about $6 billion and insured losses of $1.7 billion.

This spring melt will likely result in the flooding of some roads and farmland, the Canadian Press reported Thursday. Flows on the Assiniboine and Souris rivers are also expected to be high, but peak water levels will be below flood protection levels, the provincial government said.

Ice is expected to be thicker than normal over the next couple of months, which would increase the risk of ice jam-related flooding.

“March remains a crucial month in terms of snowmelt and weather conditions, and how that will affect the flood forecast going forward,” Schuler said.