One simple way to reduce the severity of barn fires

Early response systems include things like heat, fire and smoke detectors that can be put in barns to trigger a response “much more quickly than somebody pounding on your door at four in the morning saying, ‘Hey, I see fire through your roof and through the windows,’” Worsley said. “If you can get to that where the fire’s in its incipient stage, like your smoke detector in your house gets, at least you can try to mitigate the loss or get there and maybe put it out.” 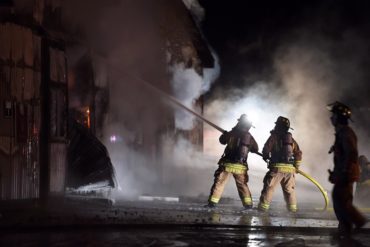 Firefighters work to bring a blaze under control at the Classy Lane Stables, in Puslinch, Ont., on January 5, 2015. Forty horses were killed when a fire engulfed a stable building at the facility near Guelph, Ontario. THE CANADIAN PRESS/Andrew Collins

There have been a number of farm fires over the past few years, with seemingly more awareness and media attention brought to the issue in recent years. For example, one memorable barn fire was at Classy Lanes Stables in Puslinch, Ont. in January 2016 that destroyed a barn and the 43 horses inside.

How do barn fires compare to house fires for insurers? Worsley said over the past six years, he has seen the number of fires “sway year-to-year” between house and barn fires. However, the severity is much different with a barn fire, as they tend to be total losses due to wood frame construction. While water is often considered the “new fire” in personal lines, in agri-business, fires are still the leading cause of losses.

So, what can be done to help reduce the severity of losses?

Some carriers that insure agricultural risks will use risk control services. For example, inspectors may use thermographic imaging on electrical systems to try and find spots that are potential issues to keep them from becoming a real issue.

Electrical classifications for high-hazard locations, where fixtures are dust- and explosion-proof, is another possibility. Farmers are early adopters of technology, so drones and automation can also be brought to bear on the problem.

Another option is separation, where fire doors and fire walls help compartmentalize a commercial building. However, this option can be difficult in confined lifestock risks, as the animals need to move around freely. “You can’t really have true two-hour fire separations without an exorbitant cost to have proper opening and closing fire doors,” Worsley said.

What about automatic fire sprinklers? While this is sometimes cited, there is a misconception about sprinklers on farms, Worsley noted. To manufacture the water supply required to put out a fire and install fire sprinklers would be cost prohibitive for farmers.

“The misnomer of automatic fire sprinklers in barns probably isn’t a valid option right now unless they are hooked up to city water like industrial plants are,” he said. “There’s no water supply there to help.”

At the end of the day, “it still falls to the operator to make sure they are doing everything they can to reduce their fire exposure in terms of extension cords, housekeeping, flammable liquids… [and] welding,” for example, Worsley said.

More News
Related
Is your client covered from business interruption arising from terrorism?
Fort McMurray wildfire could hurt 2016 Q2 results for some Canadian p&c insurers, companies offering help
What’s holding back Lloyd’s price increases
Why your clients may not be covered when there’s an active wildfire