VANCOUVER – BC Hydro crews worked through the night to restore power to thousands of customers in southern British Columbia following a wicked snow and wind storm that arrived on the first day of winter.

Hydro was reporting as many as 90,000 customers were in the dark at the peak of the storm but crews had whittled that back to about 38,000 across Vancouver Island and the inner south coast by early Tuesday.

Highway crews cleared most major routes into the Interior that were closed Monday as at least half a metre of snow blanketed the Coquihalla causing dozens of spinouts and accidents. 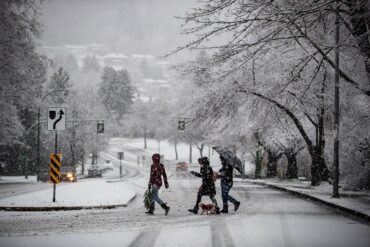 Heavy snow falls as people wearing face masks to curb the spread of COVID-19 cross a road in Burnaby, B.C., on Monday, December 21, 2020. Environment Canada issued a snowfall warning on the first day of winter with up to 5cm of snow expected for Metro Vancouver and up to 20cm for other areas of the province. THE CANADIAN PRESS/Darryl Dyck

But those heading to or from Vancouver Island are getting better news with schedules returning to normal after most sailings were scrubbed by high winds Monday.

Environment Canada lifted wind warnings for eastern Vancouver Island, the Gulf Islands and Kamloops area before sunrise but is maintaining winter storm and snowfall warnings for the southeastern corner of B.C., with 10 to 25 centimetres of snow forecast before conditions ease later in the day.