Tips for your clients to protect against cargo theft

If your clients are carrying cargo, they should take a comprehensive and layered approach to protecting these goods, a transportation expert from Travelers said recently.

He discussed shifting trends in cargo theft and how technology could be used to prevent cargo theft and recover stolen goods in an interview with Canadian Underwriter earlier this month.

Cornell said the first layer of good processes, procedures and practices is usually free. Some examples of this include driving refueled and how to look for secured parking. Another example is having the driver take all their breaks and hours available to them before picking up the load. Cornell said this allows the driver to “travel what we call a red zone distance, which is anywhere between 150 to 250 miles depending on the company policy, so that they can’t be followed to a truck stop immediately after picking up the load, where they become an easier target for cargo thieves.”

The second layer involves the use of hard security devices such as high-security door locks, sealed protection, and immobilizers in the cab, including air brake locks or landing gear locks on the trailer if the trailer is not going to stay hooked to the tractor. 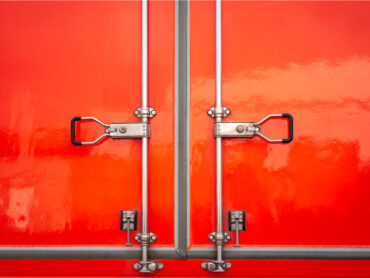 The third layer — the use of technology-tracking devices — could include things like route evaluation or route fencing. This is “where you can say this is the route you’re going to take and the device will send notification if the truck deviates from the route,” Cornell said. “And then you can make contact with the driver; you can use them for check-in and check-out policies where the driver is going to be on their break time. So those devices can be extremely effective.”

One of the questions that often arises with a tracking device is “where do we put it?” Cornell said. The tractor is not a good idea because when most cargo thieves steal the tractor and trailer, they will disconnect the tractor shortly afterwards “because they’re worried about tracking in the tractor,” he reported. “So, we’re going to eliminate that as a first rule pretty quickly.”

Clients will often put the tracking device in the trailer. “And that tends to be pretty effective,” Cornell said, because there is a certain amount of time it will take thieves to get somewhere and offload the trailer, so “it does give you a time window. But that goes back to that procedure of, ‘Are you getting an alert that the trailer is off route or that the trailers moved outside the geofence?’ Because now the clock is ticking to use that tracking ability and find the trailer.”

And nine times out of 10, the cargo is more valuable than the trailer that it’s in, Cornell said.

The third option is putting the tracking device right in the cargo. “That’s going to be the most effective way I’m going to give anybody who’s looking for that cargo the longest window to find it.”

And these tracking devices are now very small — when they first came onto the market, they were the size of a brick, but can now fit in a pill bottle. Some are even disposable, single use.

“If you’re shipping things like, let’s say pharmaceuticals, you probably want the tracking device in the cargo,” Cornell said. “We preach redundancy, meaning if you can have one in the trailer and one in the cargo, that’s going to be the most effective.