Garrett Jones has an impressive track record in the insurance industry. And it’s all because of one core value: his passion for the community.

He’s relatively new to the brokerage world, having joined Kelowna, B.C.-based Valley First, a division of First West Credit Union, as their regional sales leader for commercial insurance in 2017.

So, how did a former RBC Insurance senior advisor and Allstate agency manager become the head of a brokerage, managing a team of direct reports and selling commercial insurance for the first time? By building relationships—both personally and professionally. 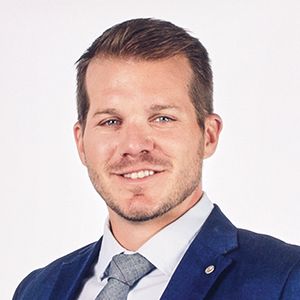 “It’s key, having a diverse network,” Jones says. “I’ve been fortunate throughout my career to meet some amazing individuals.”

His community involvement—he’s served as a member of not-for-profit boards of directors and coached kids’ sports teams—has helped him develop the leadership skills he draws on today.

“To have direct reports is a new era in my career,” he says. “The first thing I wanted to do was lead by example, taking more of a coach mentality. My biggest objective for my management style was to set the pace and create a work ethic.”

Since becoming the commercial insurance lead at Valley First, his team has grown its total book of business by 15.8%. But achievements like that aren’t what drive Jones.

“Working for a credit union that’s putting its money back into the community is why I made the move to Valley First,” he says. “The insurance industry does so much for communities. We need to do a better job of communicating that to the next generation.”