Tornado damage: View from the ground

Claims adjusters are reporting a wide range of claims from the two tornadoes that tore through the Ottawa-Gatineau area Friday.

“The tornado event is considered to be more like a ‘pocket storm,’” Kumar Sivakumaran, vice president of national operations with ClaimsPro, said Monday. “We anticipate the volume will be handled under the Ontario Disaster Relief Program.” The program provides financial assistance to homeowners, tenants, small owner-operated businesses, farmers and not-for-profit organizations to help cover emergency expenses (sometimes including evacuations) and costs to repair or replace essential property after a disaster. Applicants do not receive financial assistance for costs that are covered by insurance. 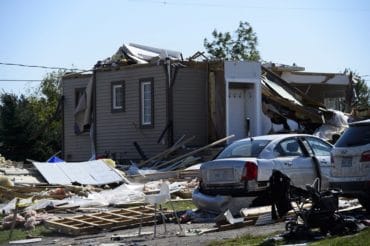 Brent Hackett, vice president of operations for Ontario with Crawford & Company (Canada), told Canadian Underwriter Tuesday the areas with the greatest impact seem to be Dunrobin, Ont., just west of Ottawa, and Gatineau, Que. “Damages range from simple siding and roof restoration needs to complete destruction of properties,” he said. “We are seeing losses across all risks – residential, commercial, industrial and institutional.”

Sivakumaran noted ClaimsPro is seeing a mix of claims – “everything from total losses for homes to downed trees to business interruption from power outages.”

Hackett said Crawford has seen increased wind- and water-related claims activity since last Friday afternoon. “Extra staff have been brought on over the weekend to manage the surge of new claims.”

Certain areas are restricted at the moment, as they are unsafe to enter, Hackett said. Gatineau residents have reportedly been told to wait 10 days before returning to their homes. Crawford has been actively communicating with policyholders since last Friday afternoon and has field adjusters, engineers and quantification specialists on standby to assist once those areas are deemed safe.

For ClaimsPro, teams of adjusters were mobilized on the weekend to the affected areas surrounding Ottawa and Gatineau to assist with the Ontario Disaster Relief Program, and on-call adjusters are working with individuals, families and businesses.

Sivakumaran said the EF3 tornado destroyed 50 residential and commercial properties before crossing over into Quebec, where “a further 100 properties were affected to a lesser degree.” As of Monday, about 215 buildings were damaged or destroyed in Gatineau, the Canadian Press reported Monday.

A second and smaller F2 tornado set down in southern Ottawa, where most notably, it struck hydro sub-station in the city, Sivakumaran said. It downed power lines, tree and – to a far less degree than Dunrobin and Gatineau – damaged some houses, roofs and fences.

A third tornado, an EF1, reportedly touched down in the late afternoon of Friday in Calabogie, Ont., west of Dunrobin. Its winds reached 175 km/h, damaging roofs and uprooting trees.