Emergency team members have been dispatched to help employees and communities affected by the tornado that damaged and shut down Canadian Solar’s solar cell factory in China, although it is not anticipated the event will have a material impact on the business. 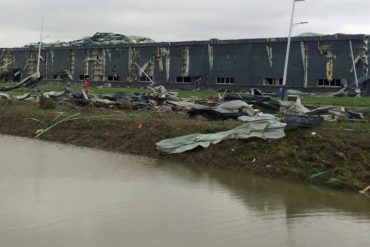 A firefighter walks past a damaged building in Funing county in Yancheng city in eastern China’s Jiangsu Province Friday, June 24, 2016. A tornado and hailstorm struck a densely populated area of farms and factories on the outskirts of an eastern Chinese city on Thursday, killing dozens of people and destroying buildings, smashing trees and flipping vehicles on their roofs. (AP Photo/Paul Traynor)

“We have immediately dispatched our internal emergency response team from our other facilities in China to help our employees in Funing and people in the local communities,” Dr. Shawn Qu, chairman and CEO of Canadian Solar, says in a statement issued Friday. “We are assessing the situation, but do not expect it to have a material impact on our business,” Qu says.

The severe tornado on the afternoon of June 23 damaged the facility in Funing County, Jiangsu Province, China, prompting Canadian Solar, one of the largest solar power companies in the world, to shut down the facility.

Resulting in property damage and personal injuries, Canadian Solar reports the “facility is currently shut down while the company assesses the extent of the damage.” As it stands, the company “expects to recover substantially all of its financial losses through insurance,” notes the statement.

“Canadian Solar carries both casualty and property insurance for its facilities, inventory, business interruption insurance, as well as health and medical insurance for all its employees, and is reviewing the extent and scope of this coverage with its insurance carriers,” the company reports.

Canadian Solar notes that of other wafer, cell and module manufacturing facilities in China ­Funing is the newer and smaller of its two solar cell factories in the country ­ and abroad are not affected.

“The company was anticipating that solar cell production from the Funing cell factory would reach approximately 267MW (megawatt) in the third quarter of 2016, representing 15% to 20% of its solar cell requirements for the quarter,” notes the statement.