Total economic losses from disaster events in H1 2016 up 38% to US$71 billion, insurance industry covered 44%: Swiss Re

Total economic losses from disaster events in the first half of the year rose by 38% to US$71 billion from the same time last year, primarily due to natural catastrophes, according to preliminary sigma estimates from Swiss Re.

Of the total economic losses from natural catastrophes and man-made disasters, the global insurance industry covered a total of US$31 billion, or 44% of the total losses, Swiss Re said in a statement on Thursday. Nat cats made up the majority of the total – US$68 billion (compared with US$46 billion in H1 2015), while the remaining came from man-made disasters. 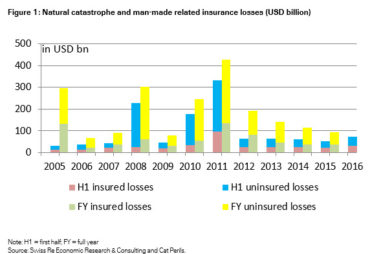 The Fort McMurray wildfire, earthquakes in Japan and thunderstorms in the United States and Europe caused the largest insured losses, Swiss Re said.

Total global insured losses from nat cats rose to US$28 billion, driven by large losses from different perils, from thunderstorms to wildfires, across all regions. This is slightly above the annual average first-half loss of the previous 10 years. Insured losses from man-made disasters fell to US$3 billion from US$5 billion in the first half of 2015.

The Fort McMurray wildfire was one cause of large insurance losses in the first half of 2016. Dry conditions and strong winds led to the rapid spread of wildfires in Alberta, resulting in the evacuation of the town of Fort McMurray, where many homes were completely destroyed. The area is the heart of Canada’s oilsands production, and the overall insured losses totalled US$2.5 billion, Swiss Re reported, “making this one of the costliest wildfire events in insurance industry history.” (On July 7, the Insurance Bureau of Canada estimated insured damage from the fire at $3.58 billion – a third of the amount in commercial property, 5% in auto and 62% in personal property).

The highest insured losses were three separate severe weather events in the United States, which included large hail, causing combined insured losses of over US$7 billion. The most intense of these storms was a major convective storm in Texas in April 2016. This resulted in insured losses of US$3.1 billion, as large hailstones caused widespread property damage.

Europe was also subject to severe weather events, Swiss Re said in the statement. In late May and early June, the two slow-moving low-pressure systems Elvira and Friederike caused thunderstorms, flash floods and river flooding, with France and Germany being worst hit. The total insured losses from these storms and floods were US$2.8 billion.

In Japan, a series of earthquakes struck the Kumamoto prefecture, including a 7.0-magnitude quake that struck during the early hours of April 16. The quakes resulted in 64 fatalities, as well as extensive structural damage, fires and collapsed buildings. Insured losses from the series of shocks amounted to US$5.6 billion.

On the same day on the other side of the world, a 7.3-magnitude earthquake hit Ecuador. The worst-hit area was Manabí Province on the coast, where bridges and buildings collapsed. In total, 668 people died in the earthquake, making it the deadliest single event in the first half of the year. Given the low insurance penetration, insured losses came to just US$400 million, Swiss Re reported.

In total, approximately 6,000 people lost their lives in natural catastrophes and man-made events in the first six months of the year, compared to12,000 in the first half of 2015. In addition, insured losses from both natural and man-made cats rose 51% to US$31 billion in H1 2016.

The global insured loss total for the first half may be subject to revision, Swiss Re noted, adding that any revision as well as the ongoing hurricane season in the North Atlantic could generate higher losses in the remainder of the year.