Total worldwide economic losses for first half of 2016 at US$70 billion, up US$11 billion from 2015 half-year totals: Munich Re 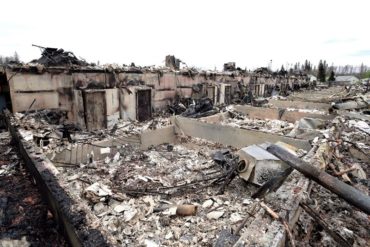 FILE – Burned out houses are shown in the Abasands neighbourhood during a media tour of the fire-damaged city of Fort McMurray, Alta., in a May 9, 2016, file photo. Severe weather events such as fires and floods are becoming more frequent and more difficult to predict, and it’s forcing architects and engineers to rethink how they design buildings, infrastructure and cities. THE CANADIAN PRESS/Jonathan Hayward, File

“The main losses drivers were powerful earthquakes in Japan and Ecuador, storms in Europe and the U.S., and forest fires in Canada,” Munich Re said in a press release.

The world’s largest reinsurer reported that natural catastrophes in the United States caused almost a quarter of worldwide economic losses, accounting for 58% of global insured losses. U.S. economic losses caused by nat cats in the first half of 2016 were US$17 billion (previous year US$12 billion), of which US$11 billion (previous year US$8 billion) were insured. Approximately US$12.3 billion (US$8.8 billion insured) of this was due to a series of storms in Texas and neighbouring states, including destructive hailstorms in Dallas and San Antonio, and severe flooding in the Houston metropolitan area, Munich Re said in the release.

“Homes and businesses incur the brunt of these losses, and property damage from this spring’s thunderstorm season remind us that a roof is a building’s first line of defense against hail and wind events,” said Tony Kuczinski, president and CEO of Munich Reinsurance America, Inc., in the release. “Proper roof maintenance, roofing materials and installation are all critical to helping reduce these types of losses.” [click image to enlarge:] 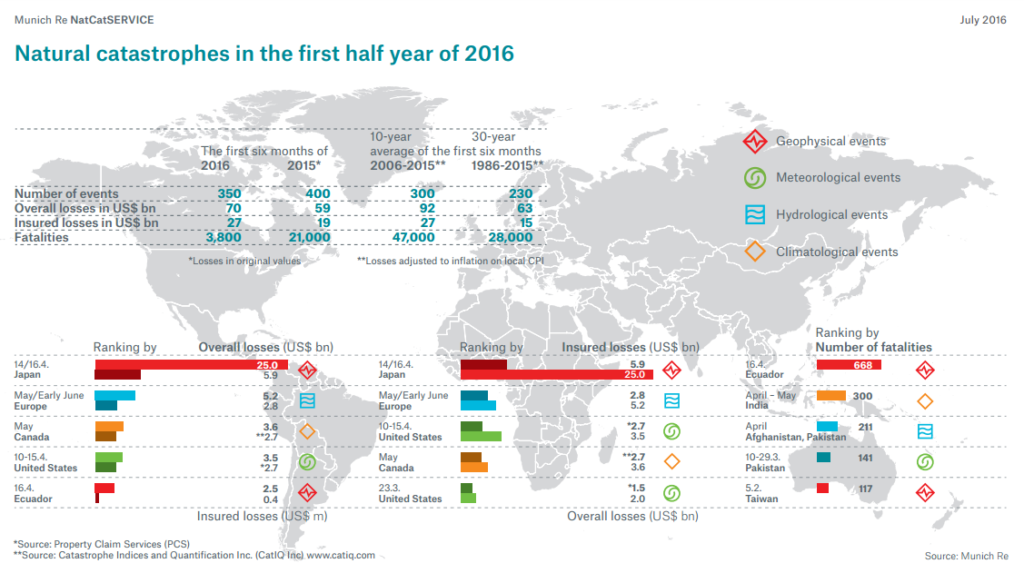 Weather extremes in Texas and other southern states are symptomatic of an El Niño phase, which can cause an increase in severe storms in the region, Munich Re said in the release. Further north, El Niño conditions also caused warm and dry conditions in Alaska and western Canada, helping to trigger the worst wildfire in Canadian history.

“The fading El Niño again showed its teeth with forest fires in Canada caused by the dry conditions and heat, and a series of storms in Texas, bringing billion-dollar losses,” said Peter Höppe, head of Munich Re’s Geo Risks Research Unit. “The complete absence of tropical cyclones in the northwestern Pacific in the first half of the year is also likely to have been influenced by El Niño.”

Other highlights for the first half of 2016 include:

In the 1st half of 2016, nine natural catastrophes caused overall losses of >US$1bn each. #NatCat2016 @iiiorg pic.twitter.com/iP6ul1mnJU