WINNIPEG – An extremely dry spring in the eastern Prairies has meant an early start to fire season and in some cases trains are being suspected as the cause.

“It is tinder dry,” said David Phillips, senior climatologist for Environment Canada. “The only thing that has prevented a burning inferno is that it has only recently turned warm.” 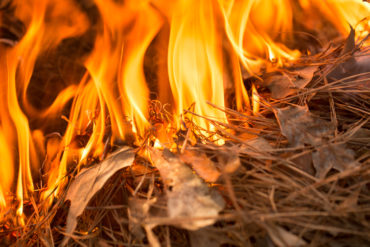 Several grass fires have broken out in recent days in Winnipeg, where a record low of 28 millimetres of precipitation has fallen since Jan. 1.

It’s a similar story throughout southern Manitoba and much of Saskatchewan. The snow has melted and there’s been virtually no rain to start the grass turning green. The dry, brown fields can be like kindling to the smallest spark.

“Even if it’s a broken glass bottle that’s lying in a ditch. The sun can shine through there and ignite a fire because the conditions are so tinder dry,” said Tom Wallace, deputy chief of the Winnipeg Fire Paramedic Service.

Wallace said a train that rolled through Winnipeg on Sunday is suspected of starting five grass fires. The investigation is in its early stages, he cautioned, but the flames erupted at different points along the track as the train passed through the city from east to west.

A similar scenario was reported in Kannata Valley, Sask., north of Regina on Monday. A grass fire erupted and destroyed three homes. An area resident, Linda Schaeffer, said some people saw sparks coming from the wheel of a train.

Gary Friesen, manager of the Manitoba government’s wildfire program, said train-related fires account for a small number of blazes each year. Dry conditions this year have added to the problem.

“When you have either a piece of hot metal from a malfunctioning piece of equipment from the train, or a spark blown out by the locomotive, that lands on the (grass), they can ignite.”

Even a buildup of carbon in the diesel engine, blown out the exhaust, can start a fire when conditions are very dry, Friesen added.

A spokeswoman for Canadian National Railway says the company takes measures to reduce the risk of fires and takes extra steps during extremely dry weather. Inspections of locomotives are increased as is monitoring of the land beside the rail bed.

“Engineering crews working on the track monitor weather temperature conditions and must follow specific procedures to reduce and eliminate sparks,” Kate Fenske wrote in an email. “That includes restrictions based on wind and other weather conditions.”

Officials with CN and the City of Winnipeg were to meet this week to discuss the issue.

CN covers damages when one of its trains is determined to be at fault, but there are times when cases go to court because of a dispute over the source of a blaze.

The Manitoba government recently filed a lawsuit against CN over a May 2016 fire near the Ontario boundary. The province is seeking $3.8 million – an amount that it says would cover its expenses.

Just west of Winnipeg, a tree-care company has also sued CN over a fire it says was caused by a train in April 2016.

The allegations have not been proven in court and CN has not yet filed statements of defence. Fenske would not comment on the cases while they are still before the courts.