KAMLOOPS, B.C. – An out-of-control wildfire is burning through the Cherry Creek area west of Kamloops, B.C. 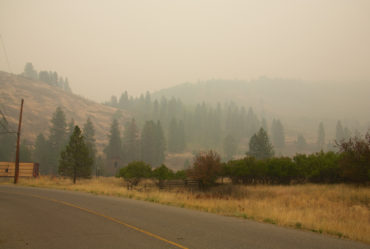 The BC Wildfire Service says the 15-hectare fire has damaged one outbuilding and partially effected a residence in the area.

Spokeswoman Justine Hunse says 48 firefighters, 11 fixed-wing aircraft and one helicopter have been involved in fighting the blaze.

DriveBC says Highway 1 at Cherry Creek was closed in both directions due to a vehicle fire, but one lane has since re-opened.

Hunse says the fire is suspected to be caused by a vehicle on the roadway.

The Kamloops blaze comes just after a wildfire destroyed a home and other structures in the south Okanagan community of Kaleden on Tuesday.

Residents of 18 homes in Kaleden that were evacuated were able to return home Wednesday afternoon, although Emergency Info BC said 165 homes in the area remain on evacuation alert.

The cause of the Kaleden fire remains under investigation.

A special weather statement from Environment Canada warns of unseasonable heat over most of southern British Columbia, including the Okanagan and Similkameen, with temperatures reaching to the high 30s for the next several days.

A brush fire near #Kamloops in Cherry Creek destroyed an outbuilding and damaged a home. Crews have now contained the 15 hectare fire. pic.twitter.com/kgp1e5i6kH

Fire crews in Cherry Creek were responding to storm damage when a fire broke out at Trillium Lodge. Chief tells us it's a total loss pic.twitter.com/dduUDiLb82