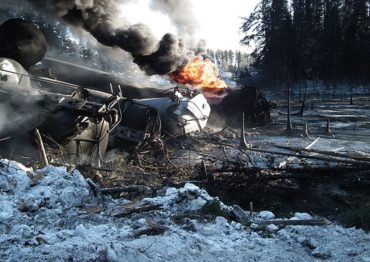 Transport Canada should “conduct a study on the factors that increase the severity of the outcomes for derailments involving dangerous goods, identify appropriate mitigating strategies including train speeds for various train risk profiles and amend the Rules Respecting Key Trains and Key Routes accordingly,” TSB said in its recommendation.

In 1979, about 200,000 people were evacuated after a Canadian Pacific train had 23 cars derail in Mississauga. Three cars with propane exploded and a car with chlorine “suffered a hole in its shell 2.5 feet in diameter,” Mr. Justice Samuel Grange wrote in a report, released in 1980, on a commission of inquiry that he chaired. No one was injured.

There were also no injuries in the CN accident near Gogama in 2015, TSB noted. The train, hauling 100 tank cars was travelling slightly slower than the 40 mile-per-hour speed limit.

“Twenty-nine tank cars of petroleum crude oil derailed and 19 of these breached, releasing 1.7 million litres of product,” stated TSB. “The crude oil ignited, resulting in fires that burned for 5 days.”

TSB “is concerned that the current speed limits may not be low enough for some trains-particularly unit trains carrying flammable liquids,” TSB chair Kathy Fox stated in a release.
In April, 2014, Transport Canada ordered railway operators to have an emergency response assistance plan (ERAP) “for the offering for transport or import of certain higher-risk hydrocarbons and flammable liquids, such as petroleum distillates, crude oil, gasoline, diesel, aviation fuel and ethanol, when offered for transport or imported by rail in one or more tank cars that are each filled to 10% of capacity or more.”

This order resulted from the July, 2013 derailment – of a Montreal, Maine and Atlantic freight train – that killed 47 in Lac-Mégantic, Quebec.

Transport Canada “immediately prohibited the use of some older Class 111 tank cars,” TSB said in an earlier report. TSB said earlier that in Canada, there will be a gradual phase out of Class 111 cars and the new TC-117 tank car standard “requires all new tank cars built for the transport of flammable liquids to be constructed using thicker and more impact-resistant steel and to be equipped with jacketed thermal protection, full-height head shields, top fittings protection, improved bottom outlet valves and appropriate pressure relief devices.”

The tanker cars on the CN train that derailed near Gogama in 2015 were “built to the newer CPC-1232 standard,” TSB said in a release Feb. 16, 2017. “Although this standard requires the cars to have additional protective equipment, the TSB determined that the speed of the train had a direct impact on the severity of the tank-car damage. Additionally, the lack of thermal protection contributed to thermal tears in those cars located in the pool fire, which led to additional product release. Consequently, the cars displayed similar performance issues as in the Lac-Mégantic derailment.”

That list contains  key safety issues that TSB says  “need to be addressed.”

The other three rail issues on the watch list are crew fatigue management systems, following railway signal indications, and on-board video cameras and voice recorders. In an investigation into the passenger train accident in 2012 – which killed three operating crew members – TSB noted it had recommended “national standards for locomotive data recorders that include a requirement for an on-board cab voice recording interfaced with on-board communications systems.”

Eleven seconds before VIA Train 92 derailed near Aldershot, Ontario in 2012, the train passed a signal which displayed a “clear to slow” signal, meaning the speed limit is 15 mph. TSB investigators speculated in the report that the crew “may have … misinterpreted” that the signal displayed the “advance clear to limited” rule. The report suggested the crew “was likely focussed on resolving the apparent track occupancy conflict of the signals work crew working ahead … rather than properly identifying the indication of the signal.”

But without in-cab voice recordings, “it is impossible to identify the precise cause with certainty,” the report noted.

In its watch list released this past October, TSB said the Canadian railway system needs “additional physical defences that ensure signals are consistently recognized and followed.”

Positive train control technology “can offer additional defences in some circumstances,” TSB said in the report released Jan. 25, 2017 on a collision between 2015 collision between two freight trains near Beavermouth, B.C. “For example, if an operating crew does not respond appropriately to a signal or other restriction, PTC is supposed to alert the crew that they are not reacting as expected. If there is no further action by the crew, the system should then intervene to slow or stop the train by applying the brakes.”