Unless Canadian airports have systems that alert air crew to wind shear, aircraft “may be exposed to the risk of approach-and-landing accidents,” the Transportation Safety Board of Canada warned in a recent investigation report. 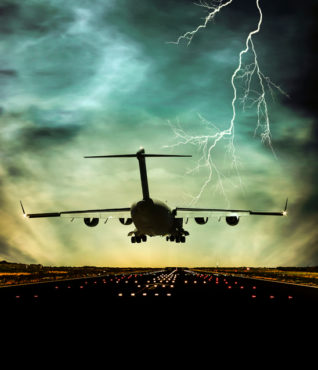 TSB released Tuesday an investigation report into an incident in 2014. An Airbus A330 was landing at Montreal-Dorval airport when the plane drifted to the left and damaged runway lights during a heavy rain shower. There were no injuries and no damage, other than to some tires.

TSB’s warning that Canadian regulations did not require Montréal-Pierre Elliott Trudeau International Airport to have a low-level wind shear alert system comes more than 30 years after the United States National Transportation Safety Board attributed a “lack of definitive, real-time wind shear hazard information” to a crash of an L-1011 in Texas, on final approach, which killed 135.

In its report released Tuesday, Canada’s TSB also reiterated a recommendation made in 2007 that Transport Canada “establish clear standards limiting approaches and landings in convective weather for all air transport operators at Canadian airports.” That recommendation resulted from an accident Aug. 2, 2005 that injured 12 people on an Air France A340. That airplane over-ran Runway 24L at Toronto International Airport after landing in heavy rain. Most of the main fuselage of the Air France plane was consumed by fire after it knocked down a guard rail and came to a rest on the east side of Etobicoke Creek.

Transport Canada “stopped short of issuing” the standards recommended by TSB in 2007, TSB said in a release March 28, 2017. TSB, which investigates incidents in marine, railways, pipelines and aviation, is not part of Transport Canada. If Transport Canada “does not take action to develop clear standards for avoiding thunderstorms during approach and landing, approaches in the presence of thunderstorms will continue, exposing aircraft to multiple, unpredictable hazards,” TSB added March 28.

Wind shear was identified as a probable cause in a July, 1982 accident that killed 153 people near New Orleans. A Boeing 727-235 operated by Pan American World Airways crashed into a residential area after takeoff. The weather observation at the time was a ceiling of 4,100 feet with visibility of five miles in moderate rain showers with cumolonimbus clouds overhead. The U.S. National Transportation Safety Board concluded the probable cause was a “microburst-induced wind shear which imposed a downdraft and decreasing head wind.” The airplane made a scheduled stop in New Orleans on a flight from Las Vegas to Miami. After taking off from New Orleans, it climbed to between 95 and 150 feet after takeoff when it descended into a line of trees, continued about another 700 metres and crashed, destroying six homes as well as the airplane itself. Eight people on the ground, plus 145 on the plane, were killed.

Three years later, 135 people were killed when a Delta Air Lines Lockheed L-1011 crashed in Texas, north of Dallas/Fort Worth International Airport. Shortly after 6:00 p.m. Aug. 2, 1985, pilots of Delta Flight 191 were landing “through the rain shaft beneath a thunderstorm” when the plane entered a microburst. The L-1011 struck a car on a highway about 2 kilometres north of the approach end of the runway. The plane then struck two water tanks at the airport and broke apart. In addition to the driver of the car, 134 passengers and crew members died.

“The probable causes of the accident were the flightcrew’s decision to initiate and continue the approach into a cumulonimbus cloud which they observed to contain visible lightening; the lack of specific guidelines, procedures, and training for avoiding and escaping from low-altitude wind shear; and the lack of definitive, real-time wind shear hazard information,” the United States National Transportation Safety Board stated of the Delta Flight 191 accident.

TSB said in its report that on Oct. 7, 2014 an “observation mentioning cumulonimbus embedded in other cloud layers” was issued at noon the day the Air Canada Flight 875 was enroute from Frankfurt, Germany to Montreal.

“At 1223, thunder associated with the thunderstorm was heard,” TSB noted. “At 1230, the thunderstorm, accompanied by rain, reduced predominant visibility to 2 statute miles.”

At 12:32 p.m., the Airbus was about 1,900 feet above ground level and 5.5 nautical miles from Montreal-Dorval. The wind at the time was from 280 degrees magnetic at 13 knots gusting to 18 knots. Two minutes later, the crew of a different airplane that had just landed reported light wind shear below 400 feet.

Then Air Traffic Control reported “the wind was now from 300°M at 18 knots gusting to 24 knots,” also reporting wind shear below 400 feet.

When the Airbus was about 30 feet above the ground, it “was to the left of the centreline, banked to the left and drifted quickly toward the left edge of the runway,” TSB said in the report. The “visibility references were degraded” due to rain and because the runway lights were out.

The runway “should not have been used under those weather conditions,” TSB said in its report. “This occurrence demonstrates how flight conditions near thunderstorms can change dramatically and abruptly, posing a risk to flight safety.”

TSB reported in 2011 that Transport Canada had presented an “issue paper,” on the risk of convective weather, to an International Civil Aviation Organization working group.

“It was agreed that the issue was worthy of consideration by ICAO but Canada should not act alone in developing a strategy to address the issue,” TSB said of Transport Canada’s response to TSB’s recommendation stemming from the 2005 Air France accident in Toronto. “It was agreed that the ICAO Secretariat would place the issue on its work plan to be dealt with at a future date.”

Air crew flying near a thunderstorm “can expect to encounter” erratic wind and gusts, squalls (violent wind blasts), turbulence, extremely violent rain, low visibility, hail and lightning,” TSB warned in its report on the October, 2014 incident in Montreal. “Furthermore, there is no correlation between the appearance of a thunderstorm and the intensity of its events.”

In 2007, in its report into the 2005 Air France accident, TSB recommended that Transport Canada “mandate training for all pilots involved in Canadian air transport operations to better enable them to make landing decisions in deteriorating weather.” In the same report TSB recommended that Transport Canada “and other civil aviation authorities require crews to establish the margin of error between landing distance available and landing distance required before conducting an approach into deteriorating weather.”