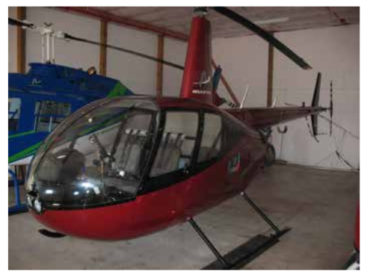 TSB released Jan. 17 an investigation report into a fatal helicopter crash that occurred in September, 2015. A Robinson R44 had been performing spraying operations for a timber firm. The helicopter crashed about 17 nautical miles south of Foleyet, Ont, roughly 100 kilometres west of Timmins. The pilot and passenger died.

“The helicopter was equipped with an emergency locator transmitter, but no signal was transmitted or detected by search and rescue agencies,” TSB said in the report. Although the helicopter took off at 8:15 p.m. September 8, it was not reported missing until 3:00 in the afternoon the following day.

“The wreckage was discovered by a company aircraft on 11 September,” TSB said in the report.

Those were made in a report into the fatal crash of a medical evacuation helicopter early in the morning of May 31, 2013. Sikorsky S-76A was operated by Ornge, the not-for-profit company that provides air medical transportation in Ontario. The S-76A was enroute from Moosonee to Attawapiskat. Four people, including crew, died in that crash.

“The search-and-rescue satellite system did not detect a signal” from the ELT, TSB said in October, 2016 in its investigation report into the Ornge tragedy, adding the external ELT antenna was found broken off at the base of the antenna.

TSB – a separate organization from Transport Canada – reports to Parliament through the Leader of the Government in the House of Commons. TSB investigates incidents and accidents in marine, pipelines, railways and aviation.

Among TSB’s recommendations from the Ornge investigation were that both the International Civil Aviation Organization and the Radio Technical Commission for Aeronautics establish “rigorous” ELT “crash survivability specifications that reduce the likelihood that an ELT system will be rendered inoperative as a result of impact forces sustained during an aviation occurrence.”

TSB recommended that Transport Canada also “establish rigorous ELT “crash survivability requirements that reduce the likelihood that an ELT system will be rendered inoperative as a result of impact forces sustained during an aviation occurrence.”

In its report released Jan. 17, 2017 into the helicopter crash near Foleyet, TSB made four findings as to causes and contributing factors. One was that the flight departed “under conditions of near darkness” and that the pilot was not certified to fly at night or in instrument conditions. Another was that the ELT did not transmit its position on impact, resulting in a 20-hour delay in initiating search and rescue.

“If existing ELT design and certification standards do not ensure that the currently manufactured systems provide a reasonable degree of survivability from fire or impact forces, there is a risk that potentially life-saving search-and-rescue services may be delayed,” TSB said in a Jan. 17 release.

In October, 2016, TSB recommended – in its investigation report into the crash of the Ornge helicopter – that Transport Canada “prohibit the use of hook-and-loop fasteners” as a means of securing an ELT.

The ELT antenna belonging to the Ornge S-76 was located on the tailboom and “found broken off at the base of the antenna,” TSB said in a report.

“The search-and-rescue satellite system did not detect a signal from the emergency locator transmitter,” TSB added.

On May 31, 2013, the Ornge helicopter had taken off about 11 minutes after midnight and about 22 minutes later the duty flight follower suspected a problem and tried to contact the crew. Both the London Flight Information Centre and Ontario Provincial Police were notified. An hour after the helicopter took off, the military Joint Rescue Coordination Centre in Trenton, Ont. was notified. The wreckage of the Ornge helicopter was found by an Air Force search and rescue team at 5:43 a.m.

“The ELT unit, which was held in position by a hook-and-loop retaining strap, was found hanging by its wire harness by search-and-rescue (SAR) personnel,” TSB said in its report. “The strap was ripped near the bottom of the tray, allowing the unit to hang freely.”

In 2012, the United States Federal Aviation Administration “issued Technical Standard Order (TSO) C126b: 406 MHz Emergency Locator Transmitter, which stated that ‘the use of hook and loop fasteners is not an acceptable means of attachment’ for automatic fixed (AF) and automatic portable (AP) ELTs,” TSB said in the report, adding that Transport Canada had not updated its standard.

One of TBS’s 17 findings as to risk was that the current ELT “system design standards do not include a requirement for a crashworthy antenna system,” and as a result, “there is a risk that potentially life-saving search-and-rescue services may be delayed if an ELT antenna is damaged during an occurrence.”

TSB also made 12 findings as to causes and contributing factors, among them that the Ornge crew was “not operationally ready to safely conduct a night visual flight rules departure that brought the flight into an area of total darkness.”

Since 1990, (TSB) “has made 580 recommendations aimed at fixing high-risk, systemic safety deficiencies in the marine, pipeline, rail and air modes of transportation,” TSB said Oct. 31, 2016, when it released its latest watch list.

“TSB recommendations are non-binding, but the relevant minister is nonetheless required by law to respond to the TSB on what, if any, action will be taken to address the underlying safety deficiency,” TSB added in its watch list, which contains safety issues that TSB says need to be addressed.

One recommendation where TSB had assessed Transport Canada’s response as “unsatisfactory” was made in December, 2007. At that time, TSB recommended that Transport Canada require all Code 4 runways to have 300-metre “runway end safety areas, or “a means of stopping aircraft that provides an equivalent level of safety.” The recommendation was made in an investigation report into an August, 2005 accident in which an Air France Airbus A340 landed at Toronto International Airport and over-ran the end of the runway at 80 knots. Ten passengers and two crew members were seriously injured after the airplane stopped on the east side of Etobicoke Creek.

Runway overruns is one of the three aviation issues on TSB’s watch list.

“Pilots need timely and accurate information about runway surface conditions in all seasons to calculate the distance their aircraft needs to land safely,” TSB state Oct. 31, 2016. “When a runway overrun occurs during landing or a rejected take-off, it is important that an aircraft have an adequate safety area beyond the runway’s end to reduce adverse consequences.”