Unstable approaches of airplanes before landing at airports was a factor in two investigation reports released this week by the Transportation Safety Board of Canada. 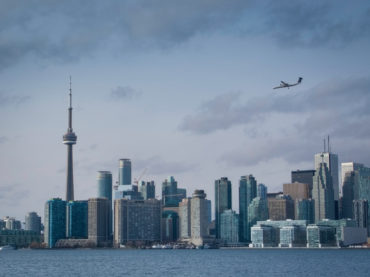 TSB – which is independent of Transport Canada – released Tuesday an investigation report into an incident in which a Bombardier DHC-8-400 operated by Sky Regional Airlines touched down at the Billy Bishop Toronto City Airport, did not slow down “in a timely manner” and came to a stop on a taxiway after exiting the runway. Billy Bishop Airport is on the Toronto Island.

“The aircraft was well above the desired approach path at the operator’s 500-foot stabilization height,” TSB said in its report on the incident, which occurred Oct. 3, 2014.

There were no injuries and there was no damage to the aircraft.

“In addition, the sink rate was not stable and exceeded the stabilized approach criteria,” TSB said of the incident. “As a result, the approach was not considered stabilized according to the company’s” standard operating procedures.

On Monday, TSB released an investigation report into an incident, in May 2014, involving an Air Canada Rouge Airbus 319 at the Sangster International Airport in Montego Bay, Jamaica.

“At approximately 14 minutes before touchdown, the aircraft was cleared for a non-precision approach to Runway 07 at the Montego Bay airport,” TSB said in a press release Monday. “The approach became unstable and the aircraft touched down hard. The landing subjected the main landing gear to very high loading. The aircraft was subsequently inspected and the main landing gear shock absorbers were replaced as a precaution.”

“When continued to a landing, unstable approaches are known to increase the likelihood of a landing accident,” TSB stated.

In the watch list released Oct. 31, TSB identified nine other issues that it says need to be addressed. The watch list did not include any issues specific to pipeline safety. Two (in addition to unstable approaches) were in aviation, one (commercial fishing safety) was in marine, two were in multimodal and four were in rail.

One of the rail issues is transportation of flammable liquids. In 2014, TSB released an investigation report into the accident in which an unattended Montreal, Maine and Atlantic (MMA) freight train, with 72 crude oil tanker cars, rolled down a hill into Lac-Mégantic, Quebec and derailed, killing 47.

In November, 2016, TSB warned of a “continued risk” of flammable liquid spills when it released an investigation report arising from a derailment Oct. 7, 2014 in Saskatchewan of a Canadian National Railway train with six cars hauling dangerous goods. Two tanker cars with petroleum distillates ruptured and the contents burned, TSB said at the time, adding that two sodium hydroxide solution tankers and two hydrochloric acid tankers did not rupture.

One of Transport Canada’s responses to the Lac-Mégantic accident was order railways to have emergency response assistance plans “for the transportation of higher-risk hydrocarbons and flammable liquids, including ethanol, for any train with one or more loaded tank cars of these products.”

The largest peacetime evacuation in Canadian history occurred in Mississauga, Ontario in 1979 after a Canadian Pacific freight train derailed.

Three cars with propane exploded and a car with chlorine “suffered a hole in its shell 2.5 feet in diameter,” Mr. Justice Samuel Grange wrote in a report on a commission of inquiry that he chaired.

In its watch list, TSB also identified runway incursions. One incident investigated by TSB happened Oct. 23, 2001 at Toronto International Airport. An Airbus A310 was being towed on a taxiway and crossed Runway 15L, without authorization, when a Boeing 767 was cleared for takeoff on that runway. The crew of the 767 aborted the takeoff but were still doing 40 knots when the Airbus cleared the runway.

“The risk of runway incursions is too high, which could lead to a catastrophic accident,” TSB stated Oct 31. Nearly 600 people were killed at Tenerife Airport in the Canary Islands after two Boeing 747s collided on a runway.

Runway overruns is another aviation issue on TSB’s watch list. On Aug. 2, 2005 an Air France A340 landed at Toronto International on Runway 24L in heavy rain and continued at 80 knots past the end of the runway, knocking down a guard rail and stopping on the east side of Etobicoke Creek. Twelve people were seriously injured and most of the upper portion of the main fuselage was consumed by fire.

“SMS has been on the TSB Watchlist since 2010,” TSB said Oct. 31. “Since then, there has been no progress on expanding the application of SMS to a broader range of companies.”

“The regulatory framework that applied to the Lady Duck did not adequately address the risk involved in the vehicle’s operation, in that the Lady Duck was not subject to construction requirements, did not require a qualified operator, and the company was not required to have a safety management structure in place,” TSB said in 2004.

TSB said in August, 2016 it has “been calling” on Transport Canada “to implement regulations requiring all operators in the aviation industry to have formal safety management processes, and for TC to oversee these companies’ safety management processes.” At the time, TSB released an investigation report on an incident that heavily damaged a King Air and injured four occupants. The airplane ran out of fuel and was forced to do an emergency landing in a field short of St-Mathieu-de-Beloeil, Quebec airport.