Some aviation firms “are not effectively managing their safety risks,” the Transportation Safety Board of Canada warned Wednesday as it released a report into an incident near Montreal that injured a pilot and three passengers in a Beechcraft King Air 100. 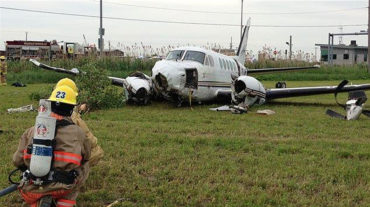 The investigation report released Aug. 17 was into an incident that occurred June 10, 2013. The King Air ran out of fuel during a 20-minute inspection flight to and from Montréal/St-Hubert Airport. Both engines stopped.  The pilot tried to glide into the St-Mathieu-de-Beloeil airport but instead conducted an emergency landing in a field short of the airport.

“The aircraft was extensively damaged, and the four occupants sustained minor injuries,” reported TSB, which investigates aviation, marine, rail and pipeline incidents. TSB does not make findings of criminal or civil liability.

The King Air was operated by Aviation Flycie Inc. The plane took off from St. Hubert at about 5 p.m. local time. The intended duration was 20 minutes. The purpose of the flight was “to check the rudder trim indicator and to confirm a potential synchronization problem between the autopilot” and the GPS. After about 14 minutes, the pilot requested and was granted a simulated instrument landing system approach to St. Hubert. When the plane ran out of fuel he diverted to St-Mathieu-de-Beloeil.

The pilot determined that 500 pounds of fuel were needed to carry out a 20-minute flight and to land with a 30-minute reserve.

“The weight-and-balance form completed for the flight showed that there were 580 pounds of fuel at the time of departure” from St. Hubert, TSB stated. But TSB investigators estimate that, in reality, there were really only about 220 pounds of fuel in the King Air when it took off. TSB estimated the airplane would have consumed 40 pounds while taxiing and therefore had 260 pounds – not 580 pounds – when the engines were started. TSB concluded there was no fuel leaking from the King Air.

TSB found that, three days before the incident, the King Air had 2,525 pounds of fuel. Then it flew from Rivière-du-Loup, Quebec to Fredericton, then to Charlottetown. On June 9, the King Air flew from Charlottetown to Montreal-Pierre Elliott Trudeau International and finally to St. Hubert.

The flight from Charlottetown to Montreal-Trudeau (formerly known as Dorval) lasted two hours and 36 minutes, or 27 minutes longer than planned.  It landed at Montreal-Trudeau “with a lower fuel reserve than that required” by regulation, TSB reported. Still, the King Air flew from Trudeau to St. Hubert and then attempted the 20-minute inspection flight without refuelling.

“It is likely that an erroneous reading of the fuel gauges by the pilot led to the pilot’s estimate that there were 580 pounds of fuel on board,” TSB concluded, adding that Aviation Flycie “did not record the quantity of fuel in the aircraft logbook before each flight, and existing regulations did not require that this be done.”

But giving pilots access to fuel use “constitutes one of the main defences against fuel exhaustion,” TSB stated. “Without such records, fuel data are not immediately available to pilots. As a result, without these data, pilots may not readily cross-check the accuracy of the gauges. Thus, unless fuel quantity is verified visually, pilots may not notice deviations in the readings. ”

However, “a visual check of the fuel on board is not reasonably possible” for the King Air, TSB added. “Hence the importance of tracking fuel quantities before flights.”

“If a flight is planned and authorized solely by the pilot, with no cross-check for compliance with existing regulations, there is a risk that deviations will continue undetected, reducing the safety of the flight,” TSB said in its report.

“When risks are managed by means of a single layer of defence, such as relying on a single person to ensure flight safety, deviations from regulations or from standard practice can occur, thereby increasing the risk of incident or accident.”

A lack of safety management systems is one of eight issues on TSB’s watch list of greatest risks to Canada’s transportation system.

“Only in the railway industry are all operators required to have an SMS,” TSB notes. “In the marine and air industries, many companies are still not required to have formal safety management processes.”

Some TSB investigations into “marine, rail, and air accidents have found instances in which SMS processes were weak or not used,” TSB notes.

Though railway operators are required by law to have an SMS, TSB concluded, in a report released two years ago, that a weakness Montreal Maine and Atlantic Railway’s SMS was one factor in the Lac-Mégantic, Quebec tragedy in July, 2013. That was when an unattended train hauling 72 tanker cars of crude oil moved downhill from Nantes and 63 cars derailed in the community of Lac-Mégantic, killing 47. The train only had one crew member. One of TSB’s findings was that Montreal Maine and Atlantic (MMA) Railway “did not have a fully functioning safety management system to effectively manage risk.”

MMA “never assessed the risks of leaving a train carrying crude oil unattended, on a downhill grade, with no other precautions taken to prevent the train from running uncontrolled, other than the assumed correct application of the handbrakes,” TSB senior investigator Don Mustard told attendees in 2015 at the 42nd Annual Engineering Insurance Conference, part of the Canadian Boiler & Machinery Underwriters Association.

“With train securement, it’s a lot easier to have one guy throwing the handbrakes and another guy holding the train with the equipment and testing to see that they’re working,” Mustard said at AEIC. “Interestingly enough, when we looked at Montreal Maine and Atlantic’s operations on the whole, we realized they were so bad at what they were doing, it was really difficult for us to say with certainty that it would have done any better with two people than it would have been done with one.”

In November, 2015, TSB released a report into an incident on the sightseeing vessel La Relève II. That vessel was on a cruise with 33 passengers and two crew members on Aug. 11, 2014. A fire broke out and everyone abandoned ship. Two passengers were taken to hospital. La Relève II “lacked written emergency procedures, formally assigned emergency duties, and training in these duties,” TSB said in its investigation report. An SMS “helps to ensure that individuals at all levels of an organization have the information needed to make sound decisions in both routine and emergency operations.”