Newfoundland’s Avalon Peninsula could get wind gusts of up to 100 km/h this week as a result of Tropical Storm Chris, which is expected to be upgraded to hurricane status Tuesday.

As of 5:00 a.m. Eastern Time Tuesday, hurricane-force winds had not been detected but Chris is “expected” to become a hurricane today, the United States National Hurricane Center said.

Forecasters predict the storm will move northeast over the Atlantic Ocean and could make landfall on southeastern Newfoundland – near the provincial capital of St. John’s – later this week. By that time, the storm is expected to weaken to post tropical storm status. 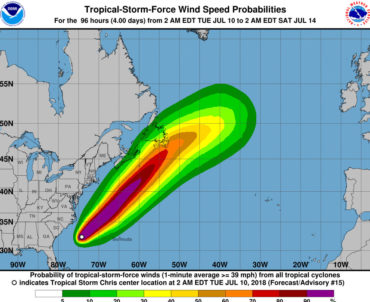 “The most likely area for strongest winds from Chris will be over the Avalon Peninsula,” Environment Canada said shortly before 9:00 a.m. Tuesday. “Based on current track and intensity, the likely range of maximum winds for these areas will be in the 80 km/h to 100 km/h range.”

The storm is “forecast to pass well southeast of Nova Scotia in a couple of days, then move near or over southeastern Newfoundland in about 72 hours,” the U.S. National Hurricane Center said at 5:00 a.m. Tuesday.

Parts of southeastern Newfoundland have a 50 to 60 per cent chance of getting wind speeds of greater than 60 km/h, but less than five per cent chance of hurricane-force winds (sustained speeds of 119 km/h or higher), according to maps posted Tuesday morning by the U.S. National Hurricane Center.

“Storm and gale-force winds over portions of the offshore waters of Atlantic Canada will occur on Thursday or Friday,” Environment Canada said Tuesday morning. “Hurricane-force warnings are likely for portions of the scotian slope waters south of Nova Scotia on Thursday.”

The tropical storm statement was in effect Monday for Moncton and other parts of southern New Brunswick, as well as parts of Prince Edward Island. As of Tuesday morning, the tropical storm statement was not in effect for any part of New Brunswick or PEI but was in effect for parts of Nova Scotia (including Sydney and Halifax), as well as parts of the island of Newfoundland (including Gander and St. John’s).

“The greatest potential for heavy rainfall associated with Chris will be over the southeastern half of Newfoundland and possibly over easternmost areas of Nova Scotia,” Environment Canada said Tuesday. “If the current forecast track holds, amounts in excess of 50 mm are possible, with even higher amounts for Newfoundland. Rainfall warnings may be required later in the week for some areas.”