If a truck falls on a mechanic, is that “use” of motor vehicle?

If a mechanic is injured while repairing a truck, does that constitute the “use” of a motor vehicle?

The question may be headed to the Supreme Court of Canada. At stake is whether commercial clients may in fact need liability insurance to cover the cost of being sued by workers injured on the job. Provincial workers’ compensation plans essentially provide no-fault insurance for workers injured on the job. In exchange for this no-fault compensation, workers normally cannot sue their employers for job-related injuries. But there are exceptions. 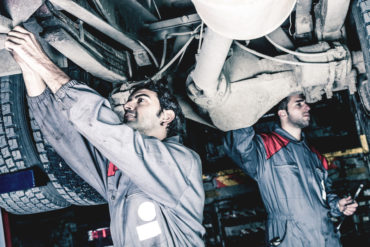 In Newfoundland and Labrador, there is an exception for workers injured as a result of the “use” of a motor vehicle.

In July 1995, Roland Warford was employed as a mechanic by Weir’s Construction Limited. He was repairing a truck that rolled off blocks; as a result, Warford was pinned under the truck. The truck’s brakes were disabled, but the indicator light showed the brakes were working properly.  Roland’s lower body was crushed. He received provincial workers compensation benefits and wanted to sue the construction company.

Warford has since died, but his estate is still trying to sue Weir’s Construction. The allegations against Weir’s have not been proven in court. The business says the lawsuit is barred by the provincial Workplace Health, Safety and Compensation Commission Act.

Initially, the province’s Workplace Health, Safety and Compensation Commission found that Warford’s could not sue his employer because his injury was employment-related and not caused by “use of a motor vehicle.”

This decision was overturned on judicial review by Supreme Court of Newfoundland and Labrador Trial Division Justice Alphonsus Faour. The decision, cited as Warford v. Weir’s Construction Ltd., was released in August 2016.

Ruling that Warford’s injuries were not caused by the use of a motor vehicle, the Workplace Health, Safety and Compensation Commission noted that the truck Warford was repairing was “not able to maneuver under its own power” and could not be used while it was being repaired.

On judicial review, the Supreme Court of Newfoundland and Labrador noted that the Workplace Health, Safety and Compensation Commission did not provide a “rationale” for its conclusion that neither a flatbed truck, nor a front-end loader were involved in the accident. The flatbed and front-end loader had been used to transport the truck that Warford was repairing.

But the lower court was focusing on “a possible action in negligence,” rather than on whether Newfoundland law permits a lawsuit to proceed, wrote Justice Gail Welsh of the Court of Appeal of Newfoundland and Labrador. “It is important to keep sight of the purpose of the Act to provide a no-fault insurance scheme,” Justice Welsh noted.

“Questions of fault and responsibility for a wrong, including negligence, do not arise unless it is first determined that an action is permitted,” added Justice Welsh.

More News
Related
‘No active deals on the table’ to sell minority interest in SGI Canada
UberX drivers expected to have commercial insurance: Shop Insurance Canada
Liability of self-driving automakers in the spotlight
Questions to ask clients who serve alcohol