The Transportation Safety Board of Canada reiterated Wednesday a 13-year-old recommendation that the federal government mandate safety management systems for small passenger enterprises. 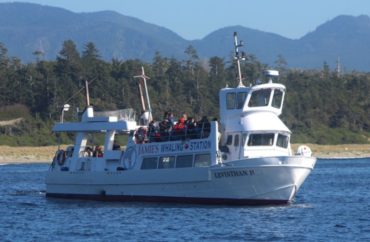 The Leviathan II did not operate under a certified safety management system, not was it required to by regulation, reported TSB, a separate organization from Transport Canada that investigates incidents in aviation, railways, pipelines and marine.

TSB recommended in 2004 that Transport Canada “take steps to ensure that small passenger vessel enterprises have a safety management system.” TSB made the recommendation in a report into the sinking in 2002 of the Lady Duck, an amphibious passenger vehicle, in the Ottawa River near the Hull, Quebec marina. Four Lady Duck passengers drowned.

“Safety management systems have not yet been mandated in all sectors of the transportation industry,” TSB chair Kathy Fox stated in a release Oct. 31, 2016 announcing TSB’s latest watch list.

“The TSB has repeatedly identified the need for domestic vessels to have an effective SMS, an issue that has been on the TSB’s Watchlist since 2010,” TSB said June 14, 2017 in its investigation report into the Leviathan II. “The Board has noted that effective oversight of SMSes by TC is not always provided, and that an SMS is not required for some companies.”

The Leviathan II, an aluminum vessel that can carry 46 passengers and four crew members, was rebuilt in 1982 for whale watching. Its owner conducts tours out of Tofino and Ucluelet.

“As the vessel was about to leave the area, a large breaking wave approached and impacted the vessel on the starboard quarter,” TSB said in the report. “The vessel broached and rapidly capsized, throwing all 24 passengers and 3 crew into the cold seawater without flotation aids. The subsequent rescue operation recovered 21 survivors. Six passengers died.”

TSB made seven findings as to causes and contributing factors. TSB said in its report that the rapid capsizing “resulted in the passengers and crew falling into the cold sea water without flotation aids or thermal protection, exposing them to the effects of cold water immersion.”

Under Canadian law, passenger vessels carrying more than 12 passengers on an international voyage subject to the International Convention for the Safety of Life at Sea (SOLAS) “are required to develop a formal” safety management system, TSB said in the report, adding this rule did not apply to the Leviathan II.

“If companies that operate passenger vessels do not implement risk management processes to identify and address environmental hazards in their area of operation, such as the potential formation of breaking waves, then there is a risk of a similar capsizing and loss of life,” TSB said in the report. “If there is no requirement for companies to assess their operations to determine under which conditions flotation aids should be worn, there remains a risk that passengers on this class of vessel will be deprived of the benefits of a flotation aid in the event of sudden and unexpected immersion in cold water.”

In its report into the 2002 sinking of the Lady Duck in the Ottawa River, TSB noted that the vessel was a converted Ford F-350 truck chassis that was used to take passengers on tours of the Ottawa area on land and water.

Towards the end of the tour June 23, 2002 the front end of the Lady Duck was floating lower than normal. After the driver made a mayday call, he gave the order to abandon the vessel but four pasengers became trapped under the fabric awning.

“Characteristics of the vehicle indicated a lack of awareness of marine standards of construction and maintenance, in that the vehicle was constructed with low freeboard, without watertight fittings at through-hull penetrations and with incorrectly installed bilge pumping arrangements,” TSB said in 2004 in its investigation into the Lady Duck accident. “The picture that emerged from this investigation was one of an organization pursuing minimal compliance with regulations rather than one seeking to minimize risk through all available means.”

It was shortly after 3:00 p.m. that the vessel capsized but the Coast Guard was not notified until 3:46 p.m. This happened after fishermen with the Ahousaht First Nation noticed a rocket flare, which deckhands of the Leviathan II activated about 20 minutes after the sinking. The fishermen approached the area from which they saw the flare and called for help by radio after discovering people in the water.