Transportation Safety Board of Canada is warning of a “continued risk” of flammable liquid spills, when tank cars derail, if new standards recommended in 2014 are not “fully implemented in a timely manner.” 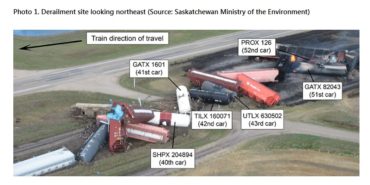 TSB released Wednesday a report into an investigation into freight train derailment Oct. 7, 2014 near Clair, Sask.

A Canadian National Railway train – with three locomotives, 40 loaded cars, 53 empty cars and seven residue tank cars – was proceeding west from Winnipeg to Edmonton. At about 11:35 that morning, a total of 26 cars – including six with dangerous goods – derailed. There were no injuries.

Near Clair, Sask., at 2:00 the morning of Oct. 8, one of the tank cars was pulled southward and removed from the track.

An hour later, the other tank car, “with approximately 20% to 30% of its load remaining, was being pulled south across an adjacent shallow ditch when the car rolled a quarter turn,” TSB stated in its investigation report. “In this position, the 65-inch-long thermal tear in the B-end compartment, which was facing upward in the derailed position, was now facing slightly downward and released an estimated 2,400 to 32,00 litres of petroleum distillates. The product pooled on the ground near the tank.”

Emergency responders “determined that the best course of action would be to flare (ignite) the pool” of petroleum distillates, TSB added in the report.

At about 4:00 a.m., the CN senior dangerous goods officer (SDGO) and assistant vice-president, safety and emergency response “ignited a road flare, approached the pool from a slightly downwind position, in line with the thermal tear, and threw the flare into the pool near the base of the tank,” TSB noted. “The pool ignited and began to burn at the base of the tank car when an unexpected flash fire occurred as the vapors inside the tank car ignited, sending a large fire ball toward the CN SDGO and AVP, both of whom took immediate evasive action to avoid the flash fire. The flash fire quickly extinguished itself.”

But TSB added in the report that Transport Canada inspectors “were unaware that a close-call had occurred during the flaring activity.”

When TSB investigators arrived at 7:00 in the morning on Oct. 8, “CN informed the TSB that a car had been flared off during the night, but there was no mention of a close-call.”

Transport Canada and TSB only became aware of the close call in December, 2015 when a video recording of the flaring activity was made public, TSB said in its report.

TSB made seven finds as to causes and contributing factors and 10 findings as to risk.

“The train derailed when a sudden and catastrophic failure of the south rail occurred under the train, due to an undetected transverse detail defect,” TSB said of causes and contributing factors. “The rail surface condition inhibited the transmission of the ultrasonic signals into the rail head and likely masked the presence of a transverse detail defect during the ultrasonic test.”

TSB also found that “the absence of thermal protection” for one of the tank cars “increased the severity of the product release and further fueled the fire as the car sustained thermal tears after being subjected to the pool fire.”

In its findings as to risk, TSB alluded to a set of regulations published in May, 2015 by Transport Canada, establishing requirement for the new TC-117 tank car standard, as well as retrofit requirements and timelines to retrofit the tank car fleet.

“If new tank car standards are not fully implemented in a timely manner, there is a continued risk of product loss and associated consequences when tank cars carrying flammable liquids are involved in a derailment,” TSB said in the investigation report on the Clair, Sask. accident.

In a press release Nov. 16, 2016, TSB noted the investigation “identified risk factors related to the transportation of flammable liquids by rail, and safety management and oversight.” 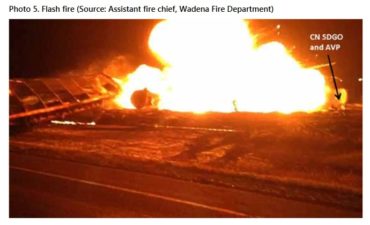 TSB made two recommendations “to address these issues as part of the Lac-Mégantic investigation,” TSB added Nov. 16, referring to the July 6, 2013 tragedy in Quebec. On July 5 of that year, a Montreal, Maine and Atlantic (MMA) Railway train hauling 72 crude oil tanker cars was stopped for the night near Nantes, nearly 200 kilometres south of Quebec City. At about 1:00 the following morning, the unattended train started to move downhill, picked up speed and 63 tanker cars derailed in Lac-Mégantic. Forty-seven people died.

The investigation report, released the following year, included a recommendation that Transport Canada and the United States Pipeline and Hazardous Materials Safety Administration “require that all Class 111 tank cars used to transport flammable liquids meet enhanced protection standards that significantly reduce the risk of product loss when these cars are involved in accidents.”

In March, 2016, TSB assessed the status of this recommendation has having “satisfactory intent.”

Another recommendation arising from the Lac-Mégantic investigation was that Transport Canada “set stringent criteria for the operation of trains carrying dangerous goods, and require railway companies to conduct route planning and analysis as well as perform periodic risk assessments to ensure that risk control measures work.”

In its investigation into the October, 2014 Clair, Sask. derailment TSB noted that the subdivision in which the accident occurred “contained vintage rail that displayed characteristics indicating that it was near the end of its service life.”

TSB added that while CN’s risk assessment for its Prairie North Line (PNL) corridor “took into account a number of factors and had mitigating strategies in place, the risk assessment did not consider some trends in infrastructure condition (i.e., leading indicators), such as the increase in (localized surface collapses) and in track defects in older vintage rail that was at or near the end of its service life.”

Since the accident, CN has issued a new guideline that “outlines a new controlled burn procedure for flaring tank cars” and “references the importance of considering the location and orientation of any openings in a tank car where a pressure event could take place during a flaring operation.”

Of its recommendation to require route planning from railways, TSB assessed the status as “satisfactory intent.”

Transport Canada previously issued, among other things, a ministerial order “for new rules regarding key trains and key routes,” plus new Railway Safety Act rules that took effect this past February.

“While some progress has been made on the five railways that have identified key routes, analysis of the appropriate threshold criteria for key routes must still be performed,” TSB said this past March.