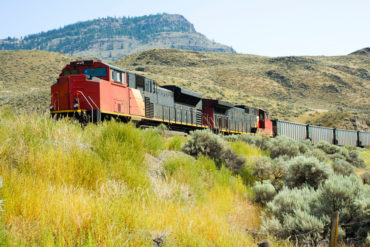 On Nov. 28, 2000, TSB released a report on a collision Aug. 11, 1998 between two freight trains in British Columbia. There was property damage but no injuries.

It occurred on a Canadian Pacific Railway track, east of Kamloops, with centralized traffic control, “a system of block signals where train movements are supervised from a central office location by a rail traffic controller (RTC),” TSB said in the report.

TSB – which investigates incidents in aviation, marine, rail and pipelines – reports to Parliament and is independent of Transport Canada.

“Train movements are governed by these signal indications,” TSB said in 2000 of the CTC system, which “does not automatically ensure positive train separation; it provides signal indications which can allow trains to operate within the same block.”

In that report, TSB recommended that the rail industry “implement additional backup safety defences to help ensure that signal indications are consistently recognized and followed.”

In its report on the 1998 collision, TSB noted there is no system in CTC “to alert a train crew of areas of restrictions or the presence of other rolling stock.” Instead, the system is designed “such that trains are given a series of signal indications that require trains to take action relative to the signal displayed.”

In April, 2001, TSB noted that Transport Canada “responded that they, in conjunction with the Railway Association of Canada (RAC) and the railways, have continued to study new technologies which could provide additional backup safety defences to help ensure that signal indications are consistently recognized and followed by train crews.”

But five years later, TSB characterized the regulator’s response as “Unsatisfactory,” because at the time, Transport Canada provided “no new information, nor proposed dates, as to when or if a backup safety defence would be implemented to ensure consistent recognition of signal indications.”

Then in September, 2010, TSB noted that Canadian Pacific had “implemented a number of new administrative defences to help ensure that signal indications are consistently recognized and followed.”

TSB noted that “no additional physical safety defences” had been engineered “to ensure consistent recognition and response to signal indications,” but that the changes made by CP “demonstrate development in this area and may have a positive result.”

TSB has considered the response to its recommendation as “satisfactory in part” for the past six years.

“While the issue is being studied, there are no short term plans to address the risk of serious train collision or derailment in the absence of additional backup safety defences,” TSB warned in March, 2015.

Train 463 rounded the curve approaching Mile 78, the crew saw the tail of Train 839 and applied emergency brakes but did not stop on time.

Damage included destruction of empty containers and major damage to a locomotive.

TSB made five findings as to causes and contributing factors.

“The signal at Mile 76.7 was misinterpreted as being a ‘Clear to Stop’ signal indication; consequently, the train crew did not reduce the train’s speed and was unable to avert the collision,” TSB said in the report.

That was the second rear end collision at that location in six years.

“Extra 5801 was stationary awaiting a meet at Notch Hill; its tail end was at Mile 78.0,” TSB noted. “The crew members on Extra 5580 misinterpreted the ‘Restricting Signal’ indication at signal 767N as a ‘Clear Signal’ indication, and proceeded through the signal under the assumption that the track was unoccupied.”