The Transportation Safety Board of Canada is reiterating its call for railways to ship flammable liquids in “more robust tank cars” after an accident near Edmonton that resulted in the spill of more than 80,000 litres of flammable styrene monomer. 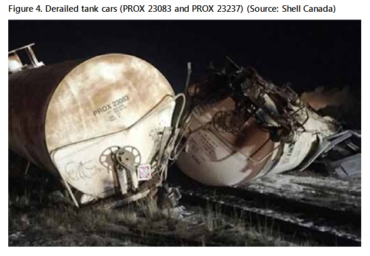 TSB released Friday an investigation report into the accident, which occurred Dec. 8. 2015 after a freight train moved through a switch that was aligned in the opposite direction.

In 2014, TSB had recommended that the federal government require Class 111 tank cars used to transport flammable liquids meet” enhanced protection” standards. TSB, a separate organization from Transport Canada, had made the recommendation on Class 111 tank cars in its investigation report on the July, 2013 accident in Lac-Mégantic, Quebec. An unattended train which was parked for the night uphill from Lac-Mégantic. It rolled downhill into the town with 63 tanker cars derailing. Forty-seven people were killed, 40 buildings were destroyed and 53 vehicles were destroyed. About six million litres of crude oil were released, about 100,000 of which ended up in the nearby lake and river.

The December, 2015 incident occurred about 50 kilometres northeast of Edmonton, at Scotford, where Canadian Pacific Railway services petrochemical firms.  There is a “wye” a series of three tracks and three switches that form a triangle.

“Where one track approaches another at right angles, a wye structure is used to permit movements to travel in either direction on the adjoining track,” TSB said in a report. One of the legs is Canadian National Railway track coming from the south.

The morning of Dec. 8, a train was moved through the wye eastward into a yard. There were three wye switches: a west, and east and a south. The east wye switch was “restored to normal for westward movements,” TSB said. Later that day a train with two locomotives and 32 loaded cars was moved to the west. The west switch was aligned against the movement. The locomotives and first 18 cars damaged the switch.

Later when the train started to move eastward, four tank cars derailed. One of them “rolled over into the ditch adjacent to the track, coming to rest upside down,” reported TSB. “The liquid line and the vapour line were sheared off during the derailment and approximately 87 000 litres of product were released into the ditch. About 6000 litres remained in the breached tank car and were later recovered.”

The Class 111 tank car that rolled over into the ditch Dec. 8, 2015 in Scotford, Alta. had been built in 2001, 10 years before the Association of American Railroads tank car standards were amended, TSB noted.

So the tank car that spilled its contents “was not equipped with top fitting protection,” TSB said in the report. “Instead, it had a hinged weather cover, and a pressure relief device was fastened to a safety valve nozzle and attached to the shell top.”

Based on its investigation of the 2015 accident and other reports, “the TSB reiterates that flammable liquids must be shipped in more robust tank cars to reduce the likelihood of a dangerous goods release during accidents,” TSB said in a press release Friday.

In July, 2016, Transport Minister Marc Garneau ordered that “all legacy DOT-111 tank cars to be completely removed from crude oil service” as of Nov. 1, 2016 TSB said in the report.

But on its recommendation page, TSB says that “until all flammable liquids are transported in tank cars built sufficiently robust to prevent catastrophic failure when involved in an accident, the risk will remain.”