January 23, 2018   by Terri Theodore and Beth Leighton - THE CANADIAN PRESS

VANCOUVER – A tsunami warning issued for coastal British Columbia was cancelled Tuesday morning after people living along parts of the province’s coast evacuated to higher ground when a powerful earthquake struck off Alaska. 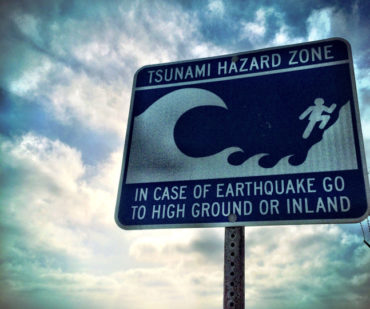 Residents in some coastal communities were woken by warning sirens shortly after the quake with a magnitude of 7.9 struck at about 1:30 a.m. Pacific time. The quake was centred 278 kilometres southeast of Kodiak in the Gulf of Alaska at a depth of about 10 kilometres.

In low-lying areas of Victoria and Esquimalt, officials went door-to-door telling people to evacuate, while elsewhere sirens and text alerts were used to get the warning out, he said in an interview.

An alert was still in place hours after the initial warning, which means there may be higher wave action in low-lying areas along the province’s coast, Farnworth said.

“Although the tsunami warning was eventually suspended, this event demonstrates that coast warning systems do work.”

Patricia Leidl, communications director with Emergency Preparedness BC, said there was a three centimetre wave and a 15 centimetre rise in sea level hours after the quake at Tofino on the west coast of Vancouver Island.

People were told to evacuate inland or to higher ground, or move to an upper floor of a multi-story building, depending on individual situations.

Dan Banks, a public works employee in Tofino, said residents in low-lying areas, including resorts on along the beach, were told to go to higher ground.

“It’s tsunami protocol, everybody is going to high ground and evacuating the low-areas like they are supposed to,” he said, adding people also gathered at a community hall.

Gillian Der, a University of British Columbia geography student who is studying in Queen Charlotte on Haida Gwaii, said she didn’t feel the earthquake.

“I don’t think any of us felt anything,” she added.

“I just heard the fire trucks going around, honking their horns and on the loud speaker saying there is a tsunami warning. It was very apocalyptic. So I was just running up the street to the muster station, up the big hill.”

The last devastating tsunami to hit B.C. was 54 years ago in Port Alberni after a 9.2 earthquake off Alaska. Two waves gathered force as they raced up the funnel-like Alberni Inlet in March 1964, hitting the city with forces that swept away houses and vehicles, but caused no deaths.

Scientists in Japan, and Vancouver Island First Nations, have gathered accounts of a huge earthquake and tsunami in January 1700 that wiped out communities and killed thousands of people. A wave the height of a four-storey building hit the east coast of Japan nine hours after the original earthquake off the B.C. coast.

People in Alaska received warnings Tuesday from the National Weather Service sent to cellphones that said: “Emergency Alert. Tsunami danger on the coast. Go to high ground or move inland.”

Lt. Tim Putney of the Kodiak Police Department said the earthquake woke him up out of a dead sleep, and he estimates it shook for at least 30 seconds.

“I’ve been Kodiak for 19 years that was the strongest, longest lasting one I’ve ever felt,” he told The Associated Press.

The Alaska Earthquake Information Center said the quake was felt widely in several communities on the Kenai Peninsula and throughout southern Alaska, but it also had no immediate reports of damage. People reported on social media that the quake was felt hundreds of kilometres away, in Anchorage.

Keith Perkins, who lives in the southeast Alaska community of Sitka, arrived at the high school early Tuesday morning, after an alarm on his cellphone alerted him of the tsunami warning. He said the city’s sirens also went off later.

Given the magnitude of the earthquake, Perkins said he thought it best to head to the school, the tsunami evacuation point, even though in the past he felt his home was at a “high-enough spot.”

– With files from The Associated Press