SYDNEY, N.S. – A tanker that ran aground off the coast of Nova Scotia has returned to port after being stuck in shallow water for a week. 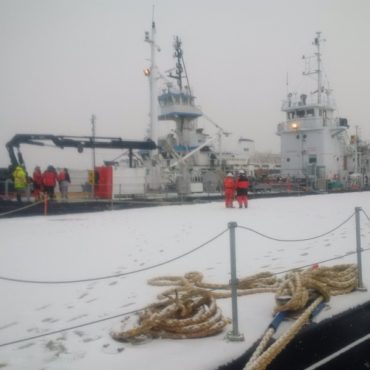 The Arca 1 tanker has returned to port after being stuck in shallow water for a week. Photo: @CCG_GCC.

The coast guard and salvage crews freed the Arca 1 from a bay near the community of Little Pond in Cape Breton on Sunday.

“We had a tanker here that ran aground. Not very often are they recovered within a week.” Laidlaw said at a technical briefing Sunday. “The work was done safely and … proficiently. There were no lives lost, no injuries and no harm to the environment.”

Around 150 locals looked on as high tides lifted the ship from the seabed, according to a coast guard spokesperson who was at the scene.

Laidlaw said salvage crews drained 300 tonnes of ballast water to float the ship, Boag said, allowing it to be pulled into deeper waters. He said tests haven’t shown any evidence of pollution around the vessel and the nine tonnes of fuel on board are secure. There didn’t appear to be any damage to the hull, officials said.

The ship has been “completely secured” at dock in Sydney, Laidlaw said, however, a containment boom has been placed around the vessel as a precaution.

The coast guard has said the vessel was on its way to its Mexico owner Petroil Marine, when it ran aground Sunday after its engines failed during a storm. Six crew had to be airlifted to safety.

A previous attempt to free the vessel failed last week and crews were dogged by weather-related delays.

“Weather forced us to wait till now to do it and it really was the best time to do it,” said Laidlaw. “A combination of sea and weather conditions may have been the best we’ve had since we’ve been up here.”

Laidlaw said the coast guard is reviewing the incident and there will be a report.

Petroil Marine is responsible for the costs of removing the ship.