Two dozen vehicles, including a bus, involved in chain-reaction collision east of Vancouver

HOPE, B.C. – Police say a crash that killed one person and injured dozens more east of Vancouver on Wednesday began with a semi-truck stopped in the S-curves on a mountainous highway that was covered in glare ice.

The RCMP said Thursday that by the time an officer arrived, a pickup truck had collided with the stopped tractor-trailer, which resulted in “a cascading, chain-reaction collision” involving at least two dozen vehicles including a bus.

The driver of the pickup, a man in his 40s from the south Okanagan, died along with his dog, police said.

Five people were seriously hurt but the RCMP said Thursday only one person remained in hospital with broken bones. Thirty-four patients with non-life-threatening injuries were cared for at the scene, Emergency Health Services has said.

The Mounties said road conditions caught many drivers by surprise. 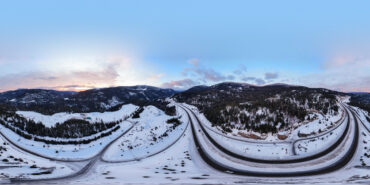 The Coquihalla Highway near Hope, about 160 kilometres east of Vancouver, reopened at about 10 p.m. Wednesday, 12 hours after the collision.

Crews had to remove more than 20 damaged vehicles, including jackknifed tractor-trailers, the bus, cars, a police cruiser and an ambulance that lost control in icy conditions on the curvy, downhill grade.

More than 30 people were taken to a nearby warming station in Hope, and police say about 50 people were involved in the accident.

In a news release, Cpl. Mike Halskov of B.C. RCMP Traffic Services said the officer who first approached the stopped truck in the northbound lanes of the highway collided with a concrete barrier when taking “evasive action” because of the road conditions.

The police car was then hit from behind by a jackknifed tractor-trailer that couldn’t stop, injuring the officer, Halskov said.

Road and weather conditions at the time “contributed significantly” to the crash.

“Speed relative to conditions also played a factor,” he said.

B.C. is experiencing a cold snap that has prompted extreme cold or arctic outflow warnings for many parts of the province and Environment Canada says temperatures at the crash site felt close to -20 with the wind chill.

Halskov said a number of rescue vehicles including an ambulance were involved in minor crashes when they arrived.

He said no criminal charges are anticipated in the RCMP’s ongoing investigation of the crash.