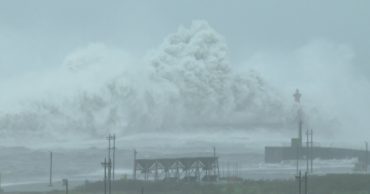 The Associated Press reported Tuesday that Megi caused at least four deaths and more than 260 injuries.

Estimates of the wind strength vary from Category 2 to Category 4 on the Saffir Simpson Hurricane Scale, RMS reported.

“There are limited damage reports so far,” RMS said, adding there are reports that four million people “around Taipei have lost water supplies after Typhoon Megi flooded the nearby river with sediment.”

#TyphoonMegi leaves over 1.9 million homes without power in #Taiwan after it made landfall at Hualien City on Tue pic.twitter.com/omxG9tz4jB

Quoting the Taiwan Power Company, RMS reported that more than 1.31 million homes lost power “at some point on Tuesday.” Megi made landfall at 4:00 p.m. local time.

RMS added “there has been widespread transport disruption, with planes not leaving or landing at the two major airports in northern Taiwan, Taouyan International Airport and Taipei Songshan Airport.” Also shut down were train services.

“Economic and insured losses from typhoons are typically low in Taiwan since typhoons, including Megi, tend to approach from the east and exposures on this part of the island are relatively low,” RMS reported. “In addition, insured building stock in Taiwan is typically designed to withstand typhoons gusts as well as water ingress.”

AP reported that Typhoon Megi is 500 kilometres in diameter and more than 300 mm of rain fell in the south and eastern mountains.

Other typhoons to hit southeast Asia this season include Lionrock, which hit Japan in August. AIR Worldwide earlier that Lionrock made landfall about 500 kilometres northeast of Tokyo.

Typhoon Meranti caused power outages earlier this month in Taiwan, though it made landfall in China’s Fujian province.

In the United States, storm Hermine was a Category 1 hurricane when it made landfall Aug. 31 in Florida, then weakened to a tropical storm as it moved across Georgia, AP reported.

#typhoon #Megi getting that ominous truck tyre look to it! pic.twitter.com/EPgaZ3nCFi