Tropical cyclones throughout the world in September have cost the global economy more than US$4 billion, according to the latest edition of Aon Benfield’s Global Catastrophe Recap report, released on Thursday. 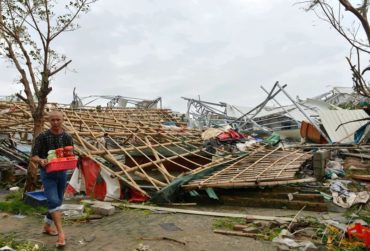 A man carries belongings away from a destroyed structure after a typhoon in Xiamen in southeastern China’s Fujian province Thursday, Sept. 15, 2016. Typhoon Meranti, labeled the strongest storm so far this year by Chinese and Taiwanese weather authorities, made landfall in southeastern China early Thursday after previously affecting Taiwan. (Chinatopix via AP)

In mid-September, a weakened Super Typhoon Meranti made landfall in China’s Fujian Province after first grazing southern Taiwan and the northern Philippines province of Batanes, Impact Forecasting noted in a press release. At least 44 people were killed and dozens more were injured, as more than 70,000 homes and vast cropland was damaged or destroyed. Overall economic losses were US$2.4 billion, with the vast majority reported in China (US$2.3 billion).

Other notable tropical cyclones during September included Typhoon Megi (US$940 million), Typhoon Malakas (US$100 million), and Hurricane Newton (US$10 million).

Also in September, Hurricane Hermine became the first hurricane to make landfall in Florida in more than a decade when it came ashore as a Category 1 strength storm near St. Marks, Fl., bringing torrential rain and storm surge flooding to coastal sections of the southeast and mid-Atlantic. Hermine was the first hurricane to strike the state of Florida since Hurricane Wilma in October 2005.

Hermine claimed at least three lives as flooding and high winds caused widespread damage and hundreds of thousands of power outages in Florida, Georgia, and the Carolinas, with additional disruption and minor damage reported in New York and New Jersey, the release said. Total economic losses were estimated at above US$800 million, while public and private insurers anticipated insured losses of around US$400 million.

Related: Insured losses in mainland China from Typhoon Meranti between US$650 million and US$1.15 billion: AIR

“After more than a decade without a landfalling hurricane, Hermine has highlighted the potential risks faced by the state of Florida,” said Adam Podlaha, global head of Impact Forecasting, in the release. “The past 11 years have been unusually inactive for the state, but it was a matter of time before it was faced with a landfalling event given the state’s longer-term historical trends. With the general increase in coastal populations, event preparedness is paramount, and in this regard the insurance industry and catastrophe modellers are well positioned to help residents understand their exposures.”

In Canada, a slow-moving area of low pressure prompted heavy rainfall in Ontario from Sept. 28-30, causing widespread flooding. Most of the major damage to property and vehicles was noted in the Essex County cities and regions of Windsor, Tecumseh and Leamington, the report said. Total economic and insured losses were expected to reach well into the tens of millions in U.S. dollars.

Related: Insured losses from Hurricane Hermine will likely not exceed US$400 million: RMS

Other natural disaster events that occurred worldwide in September include: