The U.S. Geological Survey (USGS) has confirmed historic flooding in South Louisiana on its streamgage network, with 30 registering above flood stage over the course of several days. 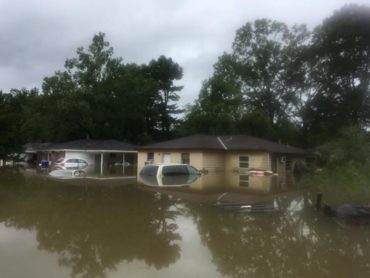 A flooded neighborhood near the confluence of the Comite and Amite Rivers near Denham Springs, LA. James Fountain, USGSPublic domain

At least six streamgages – which estimate the amount of water flowing in streams and rivers – set a peak of record, four of which have been in operation for more than 30 years, USGS reported in a press release late last week. In addition, two streamgages showed a rise of 30 feet in two to three days.

Besides realtime streamgages recording above flood stage for several days, several streamgages were damaged during the flooding, USGS added. Many of these gages were overcome by flood waters, while some were destroyed by debris carried by the fast-moving water. 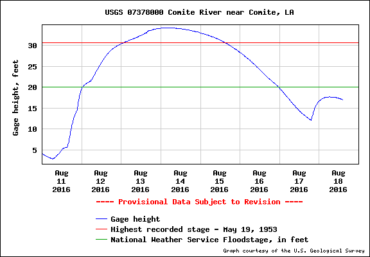 The hydrograph for the USGS streamgage on the Comite River at Comite, LA. Graph taken on August 18, 2016.

USGS analyzed one streamgage located on the Comite River, one of the major drainage rivers for North Baton Rouge and its surrounding suburbs, including Baker and Zachary. Increasing gage height (water depth) began on the night of Aug. 10, tapered off a bit on Aug. 11, before trending sharply upward until it crested early Aug. 14.

“Because the Comite is a major drainage river, the floodwaters have been slow to recede because of the many flooded tributaries that drain into it,” USGS explained in the release. “In addition, the Comite empties into the Amite River, which has also been in a record flood stage. This compounding flooding has resulted in the backwater flooding which has forced water into so many neighbourhoods.”

The Amite River, near Denham Springs, is the primary drainage river for Baton Rouge and its surrounding area. It makes its way from near the Mississippi state border through Denham Springs and the Interstate 12 corridor before emptying into Lake Maurepas. 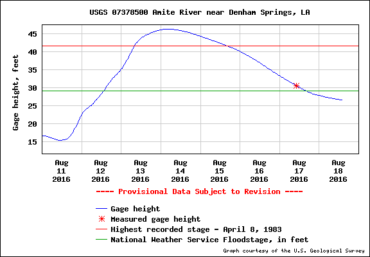 The hydrograph for the USGS streamgage on the Amite River at Denham Springs, LA. Graph taken on August 18, 2016.

Because of its status as the primary drainage river, once the Amite River began to flood, it caused backwater flooding all throughout the Baton Rouge area, USGS said in release. While there was a slower rate of increasing gage height, as compared to the Comite River, this is because it is a deeper river system and accustomed to larger volumes of water flowing through it, USGS said. As Denham Springs is about halfway down the Amite, this streamgage has shown significant drop-off in the water level as the floods have moved downstream.

Another streamgage analyzed by USGS was on the Amite River near its emptying point into Lake Maurepas near the village of French Settlement. Water levels here did not begin to rise until Aug. 13, when it passed flood stage. In addition, its water levels have been slower to drop, because all of the floodwaters that have drained upstream on the Amite, Comite and other tributaries are still making their way downstream. 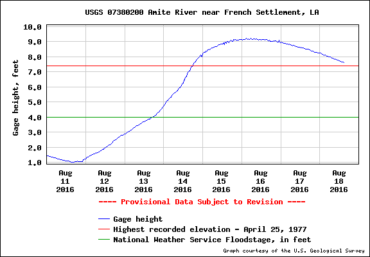 The hydrograph for the USGS streamgage on the Amite River at French Settlement, LA. Graph taken on August 18, 2016.

USGS reported that its crews are out servicing all of the affected streamgages, and they will continue to report streamflow and river height information at http://la.water.usgs.gov/floodmaps.html. In addition, USGS scientists will survey high-water marks and make indirect measurements to determine streamflow where streamgages suffered damage or at locations where previously measured streamflow have exceeded peak of record.

USGS monitors water conditions in Louisiana at 261 sites using streamgages and other measuring instruments. This information provides valuable data for agencies like the National Weather Service for flood forecasting, infrastructure information for the U.S. Army Corps of Engineers and state agencies, and water alerts for the general public.