Aon Benfield is forecasting continued growth in direct homeowners insurance premiums in the United States for 2016, despite a decreasing return on equity (ROE) for insurers. 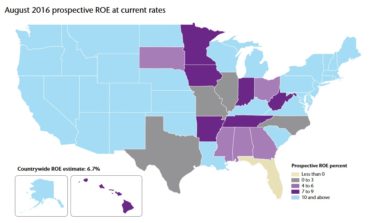 The report revealed that U.S. homeowners premiums increased from US$74 billion in 2011 to US$89 billion in 2015, and will rise to a projected US$91 billion for 2016 given prospective rate activity. The study showed that homeowners insurers secured an average rate increase of 2% during the 18 months to August 2016, with rate decreases experienced in the states of Florida, Arizona, Indiana, Ohio, Alabama, and Alaska, Aon said in a press release.

The report highlighted that a continued decrease in reinsurance pricing has offered insurers the opportunity to more extensively utilize traditional and non-traditional reinsurance in their capital strategies and pursue growth opportunities in this highly competitive sector. However, the negative effects of lower investment yields, higher expenses and an increase in the catastrophe loss ratio resulting from updates to vendor catastrophe models, are causing insurers to place a greater emphasis on underwriting performance and the development of effective strategies in pricing, claims management, marketing and risk selection.

“Our study reveals that at prospective 2017 rates, homeowners insurance provides accretive returns in the majority of states, and opportunities exist for insurers to pursue profitable growth in the line,” said Greg Heerde, head of Americas analytics for Aon Benfield, in the release.