Insurers in the United States could only answer 28% of queries across digital channels and 14% of companies failed to respond successfully on either email, social media or chat, according to new research from multichannel customer engagement software provider Eptica. 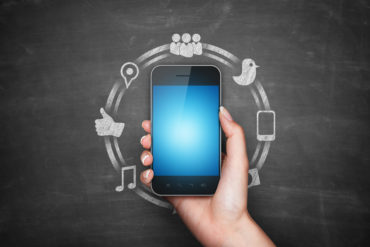 “Despite the growth of digital channels, insurers seem to be stuck in an analog world, unable to respond accurately, quickly or consistently to customer queries asked via the web, email, Twitter, Facebook or chat,” Eptica said in a press release on Thursday.

While email was the strongest channel for answers, with a 37% success rate, the average time to receive a response was nearly two days (1 day 23 hours 38 minutes), according to the 2016 Eptica Insurance Multichannel Customer Experience Study. The study evaluated 100 U.S. insurers, spread across ten sectors, including home, auto, specialty, travel and pets, among others. Additionally, 1,000 American consumers were polled on how long they were willing to wait for responses on these channels.

The study measured the ability of insurers to provide answers to 10 routine questions via the web, as well as their speed and accuracy when responding to email, Twitter, Facebook and chat. Questions were deliberately similar to those that consumers ask, such as around purchasing or administering policies online, discounts for multiple products and when cover would start, Eptica said in the release.

As well as 37% of emails, insurers provided answers to 30% of questions on their websites, 23% in response to Facebook messages and 12% to tweeted queries, according to Eptica. There were big differences between particular sectors: pet insurers answered 57% of questions online, compared to 15.5% amongst long-term care providers. “What the study found was that while consumer sectors such as pet scored highly, others (such as auto and home) failed to answer significant numbers of questions,” the report said. U.S. auto insurers answered 29% of questions “successfully” on the web, compared to 19.5% of U.S. home insurers. 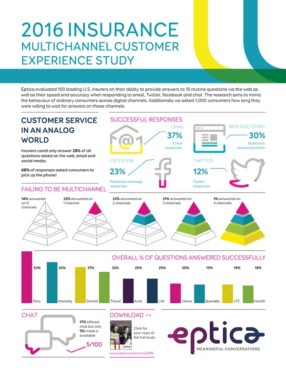 “The insurance industry is at a crossroads, with the rise of digital disrupting traditional ways of doing business,” said Olivier Njamfa, CEO and co-founder of Eptica, in the release. “To succeed in this new world insurers need to prioritize the digital customer experience, yet the Eptica study shows that they are struggling to adapt and move away from analog channels. Digital doesn’t just benefit consumers, but also drives greater efficiency and enables innovation – it is therefore time for insurers to learn from their peers in other industries and apply best practice to their operations to meet changing customer needs.”

The research also found that insurers are out of step with consumer expectations. While over half of consumers (57%) expect a response on Twitter within half an hour, just 26% of insurers met this deadline, with the majority of replies then not answering the queries. In addition, 61% of consumers complained that they could not find information on company websites half the time they looked for it.