The years of 2011 and 2014 were the costliest years for hail-related vehicle claims in the United States during a 2008-14 study period, with losses concentrated in the country’s midsection, according to an updated analysis by the Highway Loss Data Institute (HLDI) in the United States. 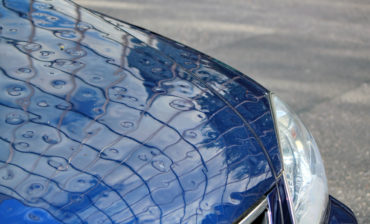 A total of 31 insurers in HLDI’s database paid US$5.37 billion in total hail claims for 2008-14, the HLDI said in a press release on Friday. Hail claims data are from the 31 companies that specify weather as a cause of loss when supplying information to HLDI. These companies’ exposure represents 87% of the comprehensive coverage exposure in HLDI’s database. Results for the latest analysis were based on more than 491 million insured vehicle years and more than 1.5 million claims, the release said.

The biggest payouts were in 2014 (US$968.9 million) and 2011 (US$948.3 million). The actual payout by all insurers is likely higher and estimated to be US$7.26 billion (US$1.33 billion in 2014 and US$1.28 billion in 2011), according to the HLDI release. This takes into account that not all companies are represented in HLDI’s database and not all data suppliers submit weather information.

HLDI has been studying the frequency, severity and cost of these claims for several years. Using information from insurers about weather-related losses under comprehensive coverage, HLDI analysts matched the dates of those claims to hail events recorded by the National Oceanic and Atmospheric Administration to determine which vehicle claims were for hail damage, the institute explained. The analysis excluded any hail storms that accompanied tornadoes, since it isn’t possible using HLDI’s data to determine which weather event caused the damage that led to the claim. Motorcycle claims also were excluded. 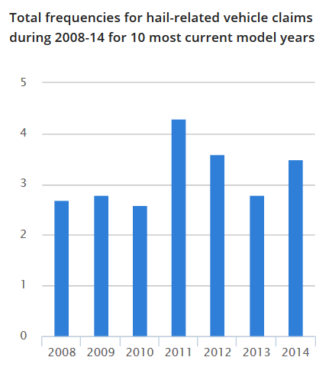 “HLDI periodically does studies to document the effects of weather on insurance losses,” said Matt Moore, HLDI vice president, in the release. “Hail storms can be devastating events for vehicle owners. Given the recent news from Texas, as soon as the final numbers are available, we will be updating this study.”

In March and April, Texas in particular has been walloped by bigger-than-baseball-size hail that shattered windows, busted roofs and dinged vehicles. Moore added that “2011 and 2014 were bad years for hail storms, but it looks like 2016 may be worse.”

So far in 2016, severe thunderstorms have not only pummeled Texas with large hailstones, but also Kansas, Missouri and Oklahoma. Vehicle damage estimates for three springtime Texas storms alone top US$1 billion, according to the Insurance Council of Texas. Some of these losses may be due to other weather factors, such as high winds.

Although Great Plains and Midwestern states predominate HLDI’s hail claims’ list, the most extreme hail events often occur in other regions, and this was the case in five of the seven years examined. While it is true that spring is prime time for destructive hail events, HLDI analysts uncovered another outlier. The worst hailstorm in terms of insurance losses to vehicles occurred in the fall in the Southwest during the study period. Vehicle damage from the Oct. 5, 2010, Arizona storm was concentrated in three counties: Gila, Maricopa and Yavapai. Of the three counties, Maricopa had the highest hail-loss tally for the day, with nearly 39,000 claims and more than US$157 million in payments, the release noted.