Merger and acquisition (M&A) activity in the United States is expected to remain steady in 2017 compared to the deal levels of 2016, according to a recent survey by audit, tax and advisory firm KPMG LLP.

Of the 94 respondents to KPMG’s M&A Market Pulse 2017 survey, 83% anticipate that they will have completed at least one deal by the end of 2016 and 65% completed multiple acquisitions. Eighty-four per cent expect to initiate a deal in 2017 and almost 75% of those surveyed plan on doing multiple deals, KPMG said in a press release on Thursday.

Limited organic growth options are primarily driving deal activity, according to 40% of respondents, followed by leveraging M&A to respond to transformation in the broader marketplace (25%).

“The fundamentals for a strong deal market continue to persevere, with corporates holding record amounts of cash and interest rates remaining historically low,” said Dan Tiemann, KPMG’s U.S. lead for deal advisory and strategy, in the release. “The C-suite recognizes that acquisitions can enhance their current business models and platforms and reduce the time to market.”

Not surprisingly, KPMG said, the technology industry is expected to have the highest level of M&A next year (45%), followed by oil and gas (28%), pharmaceutical/biotechnology (22%), healthcare (12%), media/telecommunications (11%) and financial services (6%). Seventy-eight per cent indicated that there deals will be valued below US$500 million.

“We anticipate smaller, technology acquisitions to wrap around all industries,” Tiemann added in the release. “Technology is key to driving growth for all organizations in today’s disruptive environment; it’s needed to expand capabilities, products and services.” 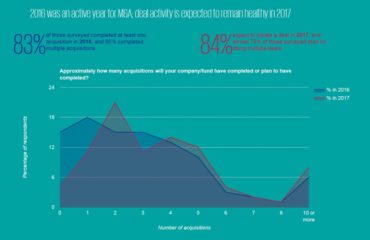 M&A investments will be national, the survey said, with the vast majority (79%) of respondents expecting their respective deal activity to take place in the U.S. and 38% expecting M&A investments to be in western Europe. “South America and India have infrastructure that isn’t well developed and China’s economy has been experiencing a decline in growth rates,” Tiemann said. “With the most stable economies, the U.S. and western Europe are the most attractive geographies for deal activity.”

Respondents indicated that if their deals didn’t transpire over the last 18 months, it wasn’t due to regulatory change (4%), the release said. Valuation issues (36%), competitive bidding (22%) and issues uncovered during diligence (22%) were the leading reasons deals fell through.

“We continue to see a gap between buyers and sellers as they pursue the transaction process – but, most buyers will pay a premium if the right target meets their organization’s strategic needs,” Tiemann concluded.