The private property and casualty insurance industry in the United States saw its net income after taxes drop to US$7.7 billion in the first quarter of 2017 from US$13.4 billion in Q1 2016, a 42.2% decline, according to ISO, a Verisk Analytics business, and the Property Casualty Insurers Association of America (PCI). 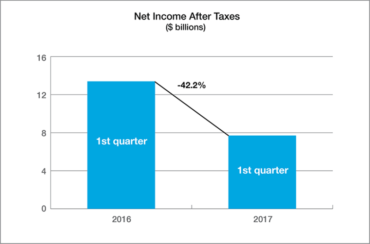 The industry’s surplus – defined as insurers’ net worth measured according to statutory accounting principles – also reached a new all-time high value of US$709 billion as of March 31, 2017, increasing US$8.1 billion from US$700.9 billion as of Dec. 31, 2016.

Beth Fitzgerald, senior vice president of industry engagement for ISO, noted in the statement that three major wind and thunderstorm events each resulted in more than US$1 billion in damages in Q1 2017, the first time there has been events of that magnitude in the first quarter in more than 60 years. “Fortunately, insurers are well-capitalized, and short-term volatility in catastrophe losses is not affecting their ability to provide coverage and pay claims,” Fitzgerald said. “They’re also seeing some acceleration in premiums and investment income. However, to remain profitable and provide appropriate returns on their capital, insurers need to plan for the long term and continue to engage in disciplined underwriting based on robust data and analytics.”

Robert Gordon, PCI’s senior vice president for policy development and research, said that industry operating results continued to deteriorate in the first quarter of 2017, noting that the “combined ratio worsened to just better than break-even, underwriting gains shifted to net losses, and pretax operating income plummeted 60 per cent as compared with the first quarter of 2016.”

Additional industry data showed that the personal auto loss ratio improvement in the first quarter of 2017, although the “rolling four-quarter average is still worse than the rolling average at the first quarter of last year,” Gordon said in the statement. Unlike first quarter personal auto improvement, personal property lines losses increased, impacted by an almost 50% increase in cat losses in first quarter 2017 compared with the same period in 2016, compounding the 2015-2016 increase of similar proportion, he said. “Policyholder surplus increased slightly in real terms, and the overall deterioration in results in first-quarter 2017 is far less remarkable excluding a special reinsurance transaction that reduced other income and pretax operating income by $6.3 billion.”

Since 1971, ISO has been a source of information about P&C insurance risk. For a broad spectrum of commercial and personal lines of insurance, ISO provides statistical, actuarial, underwriting and claims information and analytics; compliance and fraud identification tools; policy language; information about specific locations; and technical services. ISO serves insurers, reinsurers, agents and brokers, insurance regulators, risk managers and other participants in the P&C marketplace.

PCI is composed of nearly 1,000 member companies, representing the broadest cross section of insurers of any national trade association, Verisk reported in the statement. PCI members write more than US$183 billion in annual premium, 35% of the nation’s P&C insurance. Member companies write 42% of the U.S. automobile insurance market, 27% of the homeowners market, 32% of the commercial property and liability market and 34% of the private workers’ compensation market.