U.S. P&C insurers report US$1.5 billion net underwriting loss in first half of 2016 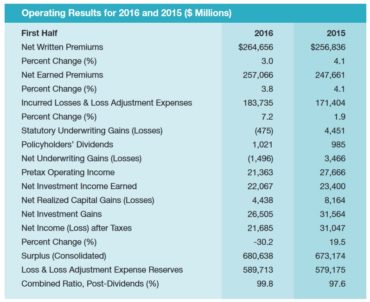 Private P&C insurers also saw their net income after taxes drop to US$21.7 billion in H1 2016 from $31 billion a year earlier, Verisk said in a press release on Wednesday.

Direct insured property losses from catastrophes striking the U.S. totalled US$13.5 billion in first-half 2016, up from US$10.7 billion a year earlier and above the US$11.6 billion average for first-half direct catastrophe losses for the past ten years.

“The industry’s results continued to worsen in the first half of the year, as insurers reported a first-half net underwriting loss for the first time since 2012 and saw their combined ratio exceed 99 per cent,” said Beth Fitzgerald, president of ISO Solutions, in the release. “Catastrophe losses remained higher than in previous years. Texas was hit by a hailstorm that has been described as the costliest in the state’s history, and several states in the central United States experienced severe thunderstorms. With interest rates and investment yields remaining low, insurers must find ways to improve operational efficiency while still providing valuable coverage for their policyholders.”

Robert Gordon, PCI’s senior vice president for policy development and research, added that the underperformance of auto insurance continues to drag down industry underwriting results. “Industry statistics we’re monitoring indicate that direct personal and commercial auto liability losses each spiked over 11 per cent from the first half of 2015, significantly outstripping premium growth,” he said, noting that the increases were a significant contributor to the worsening combined ratio, with personal lines insurers deteriorating from 100% to 103.1%, and commercial lines insurers from 94.6% to 96.0%. “As a result, while overall industry surplus rose slightly to a record high, once adjusted for inflation, real surplus actually declined and insurers’ return on average surplus dropped below the long-term average,” Gordon said.

Since 1971, ISO has been a source of information about P&C insurance risk. For a broad spectrum of commercial and personal lines of insurance, ISO provides statistical, actuarial, underwriting, and claims information and analytics; compliance and fraud identification tools; policy language; information about specific locations; and technical services. ISO serves insurers, reinsurers, agents and brokers, insurance regulators, risk managers, and other participants in the property/casualty insurance marketplace.

PCI is composed of nearly 1,000 member companies, who write more than US$183 billion in annual premium, 35% of the nation’s P&C insurance. Member companies write 42% of the U.S. auto insurance market, 27% of the homeowners market, 32% of the commercial property and liability market, and 34% of the private workers compensation market.