Major severe weather and flood events in the United States in January led to billion-dollar cost for the insurance industry, according to Aon Benfield’s latest Global Catastrophe Recap. 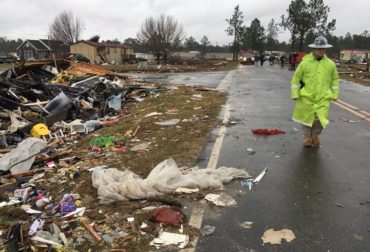 A Georgia state trooper walks past a mobile home destroyed by a possible tornado in Adel, Ga. Residents in Georgia, Mississippi and South Carolina are trying to pick up the pieces left behind by a powerful storm system that tore across the Deep South over the weekend, killing 19 people, including 15 in south Georgia. (AP Photo/Brendan Farrington)

The January report noted that separate major severe weather outbreaks swept across the U.S. last month, killing a total of 27 people. The most prolific event occurred during the second half of the month, after nearly 80 confirmed tornadoes – including three rated EF3 – touched down in the southeast portion of the country.

“Among the hardest-hit states were Georgia, Mississippi, Alabama, Louisiana and Florida as thousands of homes, businesses and other structures were damaged or destroyed,” the report said. “States of emergency were declared in Mississippi and Georgia.”

Total combined economic losses from the events (January 1-3 and 18-23) were expected to exceed US$1 billion, with the insured portion minimally in the hundreds of millions in U.S. dollars, the report said.

The report added that the National Weather Service preliminarily confirmed that at least 130 tornadoes touched down in January – the highest number in the month since 1999 (212). In addition, consecutive winter storms brought extreme precipitation across the western portion of the U.S. The most significant damage was noted in California due to flash flooding, mudslides and debris flows. Total economic losses from the early January event were expected to approach US$700 million; public and private insurance losses were listed at approximately US$300 million.

In Canada, the report noted, a dangerous ice storm impacted portions of Atlantic Canada from Jan. 24-27, leading to the deaths of two people. Dozens of others were hospitalized. The storm system led to significant accumulations of freezing rain, ice and snow to portions of Quebec, New Brunswick, Nova Scotia, Prince Edward Island and Newfoundland and Labrador. At the peak of the event, as many as 133,000 NB Power customers were without electricity. “Total economic was expected well into the tens of millions (USD).”

Other events around the globe in January:

More News
Related
Saskatoon thunderstorm estimated to cost over US$30 million, floods and convective storms cost global economy US$5 billion in June: Aon Benfield
Severe weather outbreaks in U.S. in February lead to billion-dollar payout for insurance industry: Aon Benfield
Flooding in Ontario and Quebec in April and May estimated to cost “well into the millions” in U.S. dollars: Aon Benfield
May storms in Ontario, Quebec and the Maritimes caused hundreds of millions in damage and damaged more than 5,200 homes: Aon Benfield