Uber has announced that Toronto will be the first international research hub of its Advanced Technologies Group. 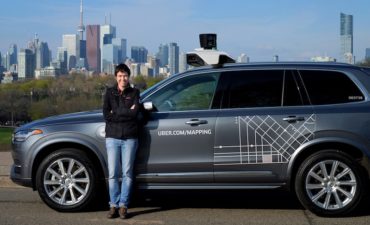 Raquel Urtasun (pictured) will lead a branch of Uber’s Advanced Technologies Group – the first outside of the United States. Credit: Uber.

The technology company also welcomed Raquel Urtasun, an associate professor at the University of Toronto “and one of the world’s leading researchers in the fields of machine perception and artificial intelligence,” to Uber. Urtasun’s work focuses on developing the software that allows self-driving cars to “see”: recognizing objects so they can navigate the world smoothly and safely, Uber said in a statement on Monday.

Urtasun will remain in Toronto to lead a new branch of the company’s Advanced Technologies Group – the first outside of the United States. “By setting up shop at the MaRS Discovery District, we hope to draw from the region’s impressive talent pool as we grow, helping the dozens of researchers we plan to hire stay connected to the Toronto-Waterloo Corridor,” the statement said.

The MaRS Discovery District brings together educators, researchers, social scientists, entrepreneurs and business leaders for a public and private mission – “an entrepreneurial venture designed to bridge the gap between what people need and what governments can provide,” according to its website.

The statement added that Toronto has emerged as an important hub of AI research with the support from the Ontario and federal governments. Uber noted that it is making a “significant multi-year financial commitment” as a platinum sponsor of the Vector Institute, which Urtasun helped set up as a co-founder. Platinum sponsors indicate a $5 million commitment. The goal of the Vector Institute, an independent research facility for AI, is “promoting and maintaining Canadian excellence in deep learning and machine learning more broadly, and by actively seeking ways to enable and sustain AI-based economic growth in Canada.”

Urtasun and her team will further strengthen self-driving engineering efforts in San Francisco and Pittsburgh. And their work will complement research underway at Uber AI Labs.

“Self-driving technology promises to make our roads safer, our environment healthier and our cities more livable,” the statement said. “While there’s still a lot of work to be done, we believe that the combination of our global ridesharing network with the cutting-edge software and hardware being built by our teams will make this vision a reality – and we couldn’t be more excited about what’s next.”