TORONTO – Uber is voicing its thanks after Toronto city council gave the ride-hailing service the green light to operate legally in the city.

In a message to those who use its app, Uber said Toronto Mayor John Tory and city council have voted to “embrace ride sharing.” 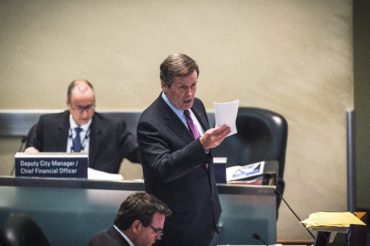 Mayor John Tory discusses the future of Uber in the Toronto City Hall Chambers in anticipation for a vote to determining the ridesharing app’s future in Toronto on Tuesday, May 3, 2016. THE CANADIAN PRESS/Aaron Vincent Elkaim

After hours of debate on Tuesday, city councillors voted 27-15 in favour of new rules for taxis and UberX, which allows regular drivers to pick up passengers without a taxi license.

The rules require UberX and taxi drivers to get $2 million in liability insurance.

The base fare for Uber will increase by 75 cents to $3.25 and all vehicles must be inspected twice a year.

Meanwhile, taxis will be able to use surge-pricing – similar to the way Uber adds extra fees to its rides at certain times – but only for fares booked through an online app.

Relations between Toronto taxi drivers and Uber have been tense for months, sparking a number of protests in the city.