With property and casualty insurance carriers reportedly exiting the long-term care (LTC) class of business following a spate of class-action lawsuits related to COVID-19 deaths in nursing homes, insurance underwriters may be interested to know about a new technology in Canada that can monitor compliance with health and safety protocols.

The location technology, introduced into Canada by Seguro Insight, was first developed in Finland by ex-Nokia engineers at a company called Quuppa. It has since seen hospital use in the United States over the past eight years, with Nesa Solutions providing the technology bridge to healthcare use cases.

By increasing the monitoring of hand hygiene, some hospitals have reported up to a 300% increase in compliance with infection prevention and control (IPAC) protocols, according to executives at Seguro Insight. They say it would take approximately eight to 12 weeks to get the tech set up in any given Canadian LTC facility. 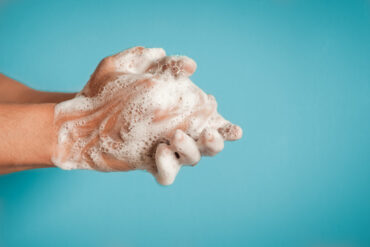 Using sensors or “beacons,” the technology “triangulates on beacons in an area,” Evans explained. “These beacons can be wearables such as a watch or a lanyard [worn by LTC workers]. We make a sink or a sanitizer another beacon so that when LTC employees are within a defined range of a sink or a sanitizer for a period of time, that would be recorded as a hand hygiene event being completed. Once that task was completed, the worker would have access to see a patient.”

Ian Hedgeland, managing partner at Seguro, provided a demonstration to Canadian Underwriter in a Zoom call. In the demonstration, you can see a rectangular shape defining a room, and several white dots moving in and out of a door.

“All of these dots represent an individual who is wearing a bracelet or who has a lanyard on,” said Hedgeland. “This is location Intelligence. Everything within the facility has now been drawn out.

“Let’s say this area is a pharmacy, for example. At the end of the pharmacy, I can create a square here that is a hand hygiene station. Whenever a person enters the pharmacy, if they don’t enter into this new parameter in the pharmacy within a certain time period, say 20 seconds, they will get a buzz reminding them to go to the handwashing station. So, for instance, with handwashing, you have to complete an action.” If the action is not completed, the system can alert a supervisor.

This anonymized data can be shared with underwriters at insurance companies, in much the way telematics data might be shared with carriers to monitor Canadian drivers’ behaviours on the road. The process represents a quantum step from a current audit practice, which is to have someone to visit the LTC facility in-person, and at periodic intervals, to monitor compliance.

Compliance with infection control protocols such as handwashing is a critical step in loss control and risk management for LTC facilities, as Lisa Marin, director of marketing and minor partner in Seguro Insight, told Canadian Underwriter. “Hand hygiene is the single most effective way to prevent the spread of organisms. It is estimated that up to 62% of [health care-acquired infections] are preventable.”

The technology comes to Canada at a critical time.

The second wave of COVID-19 infections is reportedly hitting Ontario LTC facilities with the same degree of strength as before. The Globe & Mail recently cited provincial figures showing more than 850 current active COVID-19 viral infections among LTC residents in the province, and 259 deaths in November.

During the first wave of the novel coronavirus in mid-May, COVID-19 infections had run rampant in LTC facilities throughout Canada. In mid-August, Canada’s chief public health officer Dr. Theresa Tam issued an annual report in which she noted that 7,205 COVID-related deaths were connected with LTC facilities at that time (9,060 Canadians in total had died of COVID-19 cases at that point). In other words, LTC facility deaths accounted for about 80% of all COVID-related deaths in Canada.

The federal government eventually called in the Canadian Armed Forces (CAF) to help bring the situation under control. The CAF’s report, which made headlines throughout the country, cited many appalling conditions in Ontario Long-Term Care facilities that the military had observed — conditions that Prime Minister Justin Trudeau country described as “disturbing.”

In just one instance, the CAF’s report noted the following examples of a lack of infection control: “COVID-positive residents allowed to wander,” the report noted. “Some staff not following IPAC policies (i.e. not hand-washing between patient interactions).”

These observations (and many more) drew the attention of class-action lawyers, who have sued several Canadian nursing home operators for negligence. The lawsuits, which contain allegations not proven in court, deem such conditions in LTC facilities as responsible for the rapid spread of COVID-19 through Canadian nursing homes.

All of these dynamics have underwriters understandably cautious about underwriting insurance coverage for LTC facilities — if they offer any coverage at all. Broker scuttlebutt is that some insurers are exiting this class altogether, ostensibly because liability and D&O claims costs have rendered this business segment all but unprofitable.

Seguro executives hope that risk prevention technology such as theirs will reassure insurance underwriters about underwriting this class of business, knowing that LTC facilities are in compliance with a real-time, 24/7 audit of compliance with health and safety protocols.