The University of Toronto (U of T) has announced that it will be offering a new certificate in forensic engineering, something the university calls a “first in Canada.” 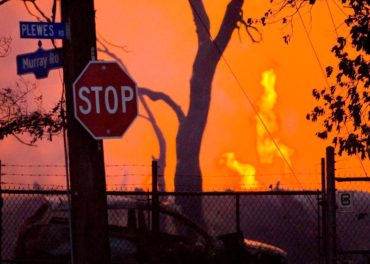 Flames shoot up at the scene of a propane explosion at Sunrise Propane in Toronto as dawn breaks on Sunday Aug. 10, 2008. Police are confirming that a firefighter was found without vital signs near the site of the massive explosion. THE CANADIAN PRESS/Angela Deluce

The U of T course is core to a new certificate in forensic engineering offered by the university’s Faculty of Applied Science & Engineering. The certificate will be offered to undergraduate students beginning in 2017-18. Forensic engineer Doug Perovic, a professor in the Department of Materials Science & Engineering at the U of T, will teach students how to analyze and prevent disasters, the university said in a new release on Monday.

According to the university, Perovic is one of the top experts in his field, having led more than 500 product liability investigations over a 25-year career. In this course, students will be exposed to investigative techniques such as how to conduct destructive and non-destructive testing, how to interpret the evidence left behind on a fracture surface or at the scene of a vehicle collision, and how to narrow down the origin and cause of a fire.

The course will also feature renowned guest experts from Canada’s top forensic engineering firms to cover principles of investigation involving product failure, auto and aircraft accident reconstruction, and fire and explosion, the release said. It will conclude in a mock trail, with lawyers from top law firms participating in demonstrations of expert witness cross-examinations.

“Most importantly, this course teaches students how to apply their engineering knowledge to ask the right questions when investigating a complex, often messy, real-world problem from beginning to end,” Perovic said in the release.

Students will examine physical evidence using sophisticated lab equipment at the Ontario Centre for the Characterisation of Advanced Materials (OCCAM), jointly operated by U of T’s materials science and engineering department and the chemical engineering department. OCCAM’s scanning electron microscopes are a powerful tool for forensic engineers; they can produce high-resolution images of a fracture surface, which can help identify the fracture origin and indicate the mode and mechanism of failure, the university explained.

Components from surgical implant failures, athletic equipment failures, corrosion investigations and foreign materials and residue analysis are a few examples of the evidence that has been brought to OCCAM for investigation by forensic engineers.

“This new certificate will create a unique opportunity for students to gain specialized expertise and recognition for a personal and professional commitment to enhanced engineering investigation skills,” Perovic said. “Learning how to think more logically is crucial for the development of good forensic engineering skills.”

One of the cases taught in the course will be the Sunrise Propane explosion in August 2008, which killed plant worker Parminder Saini. Police, fire and ambulance were called first, and then forensic engineers, the release said.

Forensic engineers are trained to find and analyze data from disasters, accidents and failures, and present an unbiased assessment of what the underlying cause may have been, the university explained. “Unlike some witnesses, physical evidence has no opinion, no bias and never lies,” Perovic said. Besides the Sunrise Propane explosion, other cases taught will include the Radiohead stage collapse in Toronto in 2012, falling glass from Shangri-La hotel in Toronto in 2014 and the painful fracture of an Ottawa woman’s prosthetic hip implant.

Jamie Catania, vice president of forensic consulting at -30- Forensic Engineering, told Canadian Underwriter that “along with having the practice of forensic engineering formally recognized by our provincial licensing and regulatory body, this new University of Toronto certificate program is truly a fantastic development, and something that elicits obvious long-term benefits for both the field of forensics and the insurance industry.”

“Having had the opportunity to lecture at Dr. Perovic’s course and hire his graduates provides us with great insight into the quality of the forensics curriculum at U of T’s applied science and engineering program,” Catania added. “Dr. Perovic is a consummate professional and his involvement with this certificate will no doubt further the discipline of forensic engineering. We look forward to supporting this program’s development in the future.”