The Transportation Safety Board of Canada is calling on the federal government to make cockpit voice recorders and flight data recorders mandatory on more aircraft and to allow use of the data in safety management systems. 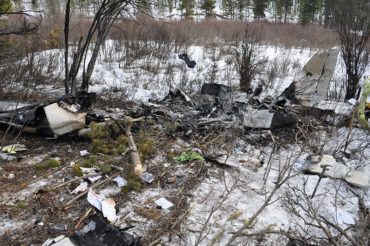 “In Canada, only multi-engine, turbine-powered commercial aircraft flown by two pilots and carrying six or more passengers” are required to have cockpit voice recorders, TSB said on a website of an active investigation into a fatal airplane crash this past February in Alberta.

“The absence of a Cockpit Voice Recorder (CVR) or a Flight Data Recorder (FDR) will make this investigation particularly challenging,” TSB said of the tragedy Feb. 13, when a twin-engine Tecnam P2006T collided with terrain about 60 kilometres northwest of Calgary/Springbank Airport. Both of the airplane’s occupants died.

“Most major carriers are required by regulation to have recorders installed on their aircraft, but a large percentage of other aircraft are not,” TSB Chair Kathy Fox wrote in an article in the April/May issue of COPA Flight magazine, published by the Canadian Owners and Pilots Association.

“Not only would a wider requirement for recorders be a great benefit to accident investigators, but those companies searching for a proactive way to enhance safety could use the recorded information within the context of a non-punitive SMS, or safety management system-to help identify hazards in their operations,” Fox added.

The board recommended more than 20 years ago that Transport Canada “streamline its processes to facilitate the timely Canadian implementation of updated flight recorder requirements.” TSB made that recommendation in an investigation report into the controlled flight into terrain, in 1993, of an Air Manitoba plane. A Hawker Siddeley 748 twin-engine turboprop took off from Sandy Point, Ont., entered a right turn, descended into trees and crashed. All seven occupants died.

TSB was able to recover serviceable flight recorders but said in its report that “no data was recorded with respect to the occurrence flight.”

A lack of data was also a factor in TSB’s investigation into the September, 1998 crash of a Swiss Air MD-11 off the coast of Nova Scotia that killed all 229 aboard.

The MD-11, en route from New York City’s John F. Kennedy Airport to Geneva, was attempting to make an emergency landing at Halifax Stanfield airport. The crew’s last communication was a minute after they declared an emergency and about six minutes before the airplane hit the water. TSB noted the MD-11 had continued to fly for about six minutes “with no on-board information being recorded.” There had been a fire on the plane. The crew noticed an unusual smell, requested a precautionary landing in Boston but took the advice of air traffic controllers and headed for Halifax instead. TSB said in its report that a “lack of recorded information hampered the accident investigation.”

A lack of mandatory on-board voice and video recorders has also been a concern for TSB in investigating rail accidents.

A bill currently before Parliament would, if passed into law, mandate installation of locomotive voice and video recorders and “address a key safety issue,” TSB said this past May.

Bill C-49, the Transportation Modernization Act, was tabled in May by Transport Minister Marc Garneau, who said if passed into law, the bill would amend the Railway Safety Act to require that railway locomotives be fitted with voice and video recorders.